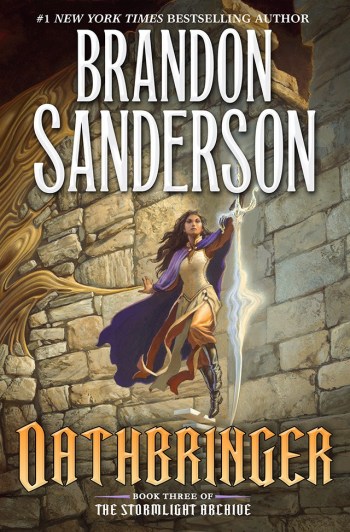 I took the past week to let my mind fully absorb all the awesomeness that was oozing off every page. If you’ve read the first two book then you know exactly what you’re getting because it’s all that and more.

What Way of Kings was for Kaladin and Words of Radiance was for Shallan, Oathbringer is for Dalinar. We are treated to the gritty and traumatic backstory that made Dalinar into the man he is today. I’ll admit I wasn’t into it at first but Mr. Sanderson really made me love this man and understand him on a very fundamental level. And the timing of it all was masterful!

This is where Sanderson’s meticulous planning really shone. We’re three books and 1.2 million words in and the number of twists, and revelations and mic-drop moments was at an all time high! Everything came together with such precision I’m convinced clock-makers are jealous.

In spite of it’s size I didn’t really notice much dragging or boring parts. Not everything was action packed but everything still felt like it was important. (However, my wrist still twinges at the thought of hold up that book and it took me 12 hours to finally realize I wasn’t reading anymore…….Lisa was also happy to see me return from the land of ink and paper.)

I would say that this book has huge implications for the course of the series and the broader cosmere universe. We get a huge pivot while also raising the stakes and keeping everything on the edge of disaster. I was honestly convinced they were all going to die and that there might be a survivor or two who carries the torch. Yep, totally dead…….so they don’t all die (spoilers?) but I am both filled with hope AND dread. They can’t win…..but they’ll totally win.

Anyway, while I piece my psyche back together, this book was exactly what I was wanting and even in ways I didn’t realize I wanted. If you haven’t started this series, not to worry. Mr. Sanderson is on an every-other-year schedule for this series so we shouldn’t expect book 4 until 2019 and we’re told there will be 10 books in this series……So you’ve got time.