Here comes the review for the second book in The Obsidian Trilogy. I’ve broken down and ordered used copies of the entire trilogy and those in the next one as well. Public Library: ∞, Robert: 1. Eat that Library who doesn’t bothering to have the best books ever! Best thirty bucks I’ve spent in a long time. They’re all hardcover, which is my preference, and they were as cheap as the paperbacks. 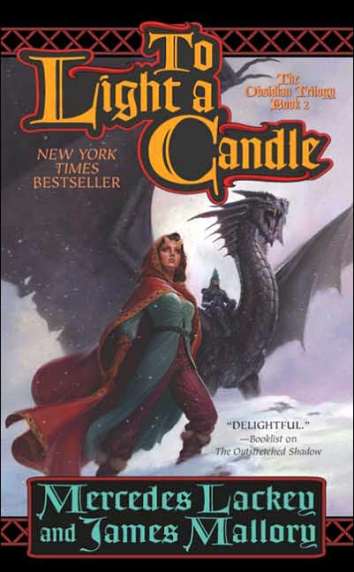 Title: To Light a Candle
Series: The Obsidian Trilogy; Book 2
Author: Mercedes Lackey & James Mallory
Genre: Fantasy
Audience: Adult
ROTS Setting: UU, Medieval, Dragons, Higher Magic
Synopsis: Kellen Knight-Mage has grown a lot from the boy who was Banished from Armethalieh. His new Wild Magic abilities are increasing daily, but will it be enough to keep the Elves from killing themselves out of tradition? Only Leaf and Star knows.
Recommendation: Adult or late teens. Mild sexual content and innuendos. Moderate violence and high gore, but well balanced and done with purpose. I highly recommend this book!

Let me say, I really like the cover art for this trilogy. It’s pretty epic feeling and just plain bad-ass.

Please note that I’m going to assume you’ve read the first book already so you can expect spoilers for the first book ahead. I’ll be talking about the characters in more depth and the history, peoples and society too. I’m going to try not to reveal too much about what happens in this book because you deserve to read it for yourself. It’s good. Really good.

But where to start?

Kellen…..I guess? Ok, so he’s an alright guy and that shows from the first moment you meet him. He seems very in tune with his surroundings and his own chaotic feelings. Still a temperamental teenager but he’s at least aware and I think that is some great subtle foreshadowing of his Knight-Mage attributes and abilities. His personal struggle to coming to grips with who he is and what the High Mages do is phenomenally written.

It had to happen. For the sake of the story? No, it was for Shalkan. He is probably in my top 10 favorite characters of all time. His wit, dry humor and sarcasm are much needed to help out weigh the constant…..feelings. Self doubt. Guilt. Fear. Loneliness. Confusion. Regret. Anger. Rage. Disappointment. Lots and lots of negative feelings. His sweet tooth is a cunningly crafted weakness that is regularly exploited to keep the unicorn feeling real and not too overbearing while also allowing for feelings to be expressed and solid advice to be given. If there is ever a movie made of this trilogy Peter Dinklage needs to voice Shalkan. I seriously read every one of Shalkan’s lines in his voice.

Idalia has got some serious history and it’s great to see that her personality is both consistent with that history but not constantly bogged down by them in the first book. Of course at the end of the book it’s revealed that she has a Magedebt for her death. It’s easy to understand some of her actions and reactions in the second book, but some of it, especially with Jermayan, feels forced, artificial, and soley for the sake of drama.

The brother/sister byplay is also interesting and fills a distinctive need in Kellen. He’s got a knowledgeable mentor for Wild Magic, living outside the City, and who can understand how alien everything is to him. If he didn’t have Idalia then Kellen would still be coming to grips with the world around him. I don’t think this level of his character development could have been achieved any other way.

The second book really builds on everything established in the first book. I haven’t come across such integrated yet separate sequential books very often and it is a hallmark of such masterful writing. You really can read from one book to the next and experience almost no time loss or an over abundance of re-explanations. They felt more like reminders than having to slog through a condensed version of the first book.

Elves. Their being hide bound in tradition was yakked constantly over the two books but considering how fast things changed and decisions were made it is actually pretty impressive for a teenager and a twenty-something managed to get an entire country moving. Elf or human. To me Kellen was always caught up in adolescent impatience and teenage pride. Seriously, they accept his word or opinion almost constantly along with making concessions for him, but he’s always worrying or complaining about how they are stuck in tradition. I think this might be the single greatest flaw of the trilogy, or at least so far.

You can rest assured that Vestakia plays a pivotal role in the second book. Although she is left relatively undeveloped. She’s a solid secondary character and it would have been nice to have seen a bit more of her and her personality shown throughout. From the bits and pieces picked up from James Mallory, the publisher frequently requires parrying down of the word count so I wouldn’t be surprised if there was more that just never made it to the printer.

Something I never picked up on in my previous reads was the frequent yet subtle reasons why the Endarkened didn’t want to take to the field in open combat. I chalk it up to my younger mind not really caring and just basking in the awesomeness. However, now that I’m an old man…..or older man, it’s been interesting unraveling the deeper twist and foreshadows.

The review for the last book in the trilogy might be a little later than I originally was thinking but that’s because I have a hard copy coming so I don’t have to use the ebook version I have now. Not that there is anything wrong with ebooks…..I just prefer the tactile experience if I have a choice.

<< Review of The Outstretched Shadow; Book 1

Review of When Darkness Falls; Book 3 >>