Again I’ve found a stack of reviews just waiting to be published and like with the previous I’ve compiled them all into a single post. No point in getting anyone’s hopes up.

Most of these quick reviews were written two years ago and never got published. Instead of posting them individually I’ve combined them and then added my thoughts about what I can remember about the last book. This doesn’t mean I’m back, just doing some house cleaning.

After months of nary a peep, I can safely say that I’m still alive. A thanks to Bookstooge for the poke, it might have been much longer for me to get back around to doing this had he not done so.

Books took a backseat to life….. Big shocker, I know. At the beginning of summer we moved across the country from Arizona to Washington (state). Lisa became a licensed pharmacist and began working like crazy. And our son started Kindergarten. You’d think this would mean I have a lot of extra time to read and you’d be sort of right. I have way more uninterrupted time without anyone around. However, if anyone is around I now have zero time since either one hasn’t seen you in several hours. I basically live in a literal bi-polar state, frantic mania trying to get everything done followed by a depressive state trying to recuperate for the next manic episode. (I feel for anyone that has clinical bi-polar disorder, you are a miracle of human perseverance.)

Anyway, I have more time alone, yet not much time to recharge. It sounds contradictory but it’s the best I can describe it. And that’s just the normal day-to-day cycle. Throw in a holiday and I’m completely useless.

Coming into this hot mess of real-life I was a bit burnt out and had hit a reading slump. Nothing was sparking my interest. So I stopped reading anything….for months. If my brain wasn’t needed, it turned off. Probably not a good way to read books, let alone review them.

I’ve picked up a few books since they’re in on-going series, but they’ve been one dumpster fire after the next. Even Temeraire got weird and I may have unearthed the most boring Sanderson book(s) he’s ever written. If I didn’t have bad luck (timing) I’d have no luck at all.

What of the future, you might be asking. I make no promises. I’m going to try and get reviews out for stuff I’ve already read but I can’t give a time frame. I’ll also try and review anything new I read, but again, no time frame. Feels like there’s a pattern here.

This is just a quick PSA to anyone who has a registered domain name, especially through WordPress.  I just got a phishing scam email disguised to look like it came from WordPress positing that my contact information used to register for my domain might be wrong and that it’s illegal to use false information.

Basically the idea is to scare you into giving your information.

What tipped me off was that it showed up in the wrong folder, so I immediately checked the email details. Anyone who’s hosted their own website (not through a service like WordPress) would easily see the problem with the email address it came from, help@Wordpress.sawbuck.com. For those not familiar, ignore the first part (help@) it’s just used to distinguish email addresses that are going to the same place, like readingovertheshoulder@gmail.com vs laym5awes69@gmail.com. (Please let that second one not be real.) The second part is a subdomain and could also be written sawbuck.com/Wordpress, which is clearly NOT from WordPress.com.

Had I not noticed it coming from the wrong address I likely would have gone further, clicking on a link. It wasn’t targeting me, it was targeting the domain to get to me. And I just wasn’t as prepared for that as I am for the fake winner scams or the Nigerian Princes looking to give away their money.

Anyway, I just wanted everyone to know since this felt unusually targeted and it’s not the sort of thing I’ve encountered a lot before. Although similar tactics are used on Facebook a lot for all the fake giveaway pages. (Always check for extra punctuation.)

This book has only the most superficial connection to either of the previous books and it might not even be in the same genre anymore. I got maybe a third of the way in and I’m bored out of my mind. No clue where this could go and I just don’t care anymore.

DNF – A Sending Of Dragons by Jane Yolen

I really enjoyed the Lost Fleet series as well but never managed to finish the last couple of the Beyond the Frontier since they hadn’t come out then and I just forgot to check back. 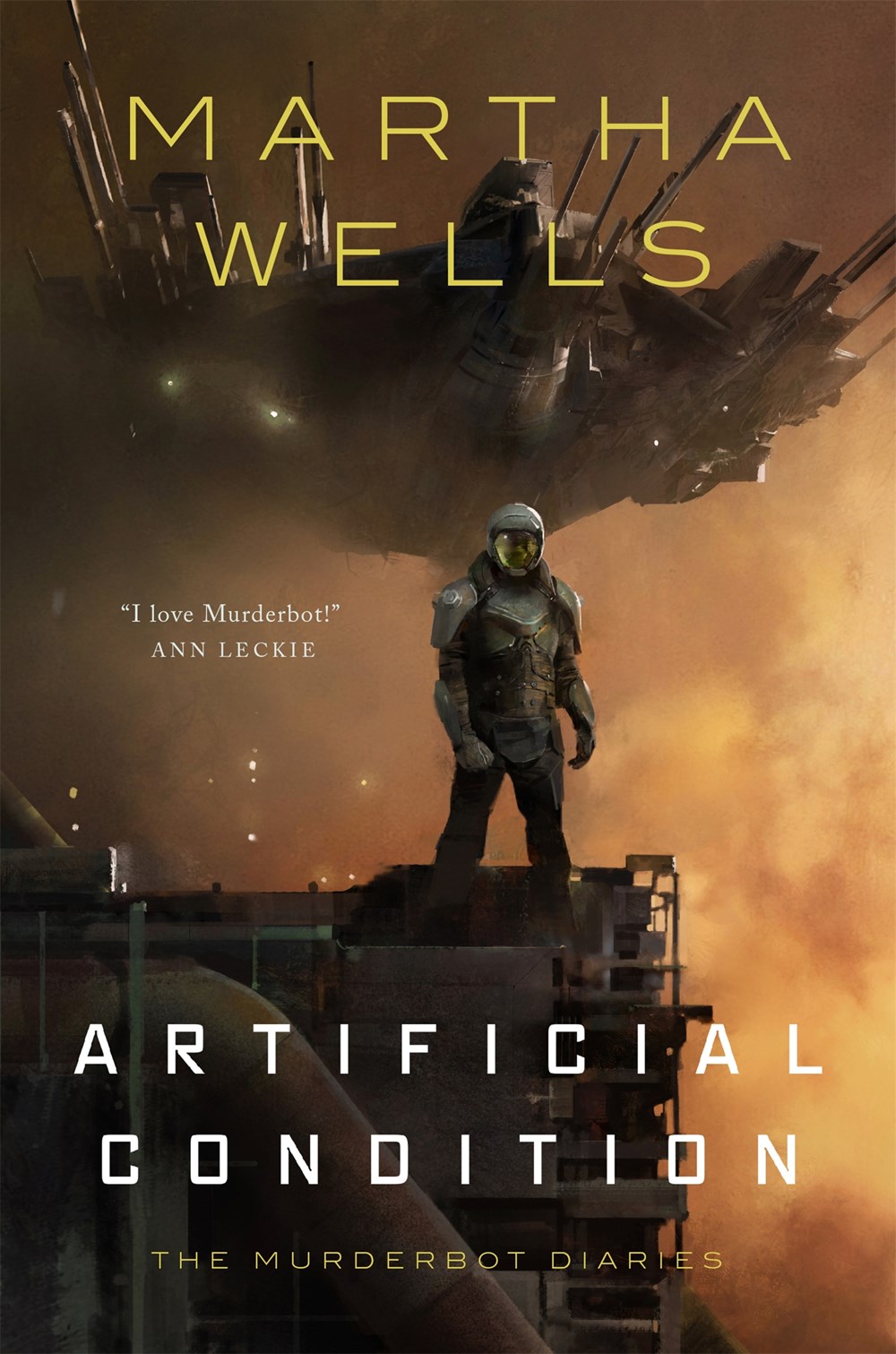 Title: Artificial Condition
Series: The Murderbot Diaries; Book 2
Author: Martha Wells
Genre: Science Fiction
Audience: Adult
ROTS Setting: CU, Distant-Future, FTL (Wormholes), AI
Synopsis: It has a dark past – one in which a number of humans were killed. A past that caused it to christen itself “Murderbot”. But it has only vague memories of the massacre that spawned that title, and it wants to know more. Teaming up with a Research Transport vessel named ART (you don’t want to know what the “A” stands for), Murderbot heads to the mining facility where it went rogue. What it discovers will forever change the way it thinks…
Recommendation: I recommend this book. Teens or older. (But the series isn’t what I liked about the first book.)

END_OF_DOCUMENT_TOKEN_TO_BE_REPLACED

So I did a dumb thing. I started reading the Lost Fleet Series. Then I couldn’t stop. 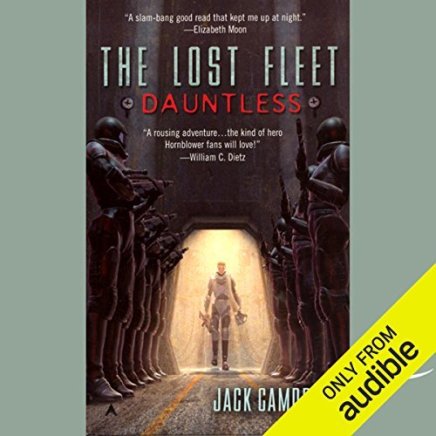 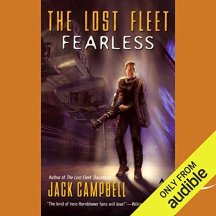 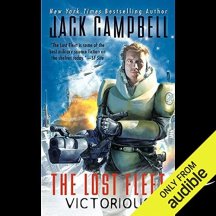 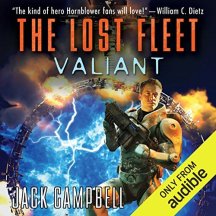 Series: The Lost Fleet
Author: Jack Campbell
Genre: Sci-Fi
Audience: Teen-adult
ROTS Setting: Future, FTL,
Synopsis: The Alliance has been fighting the Syndics for a century, and losing badly. Now its fleet is crippled and stranded in enemy territory. Their only hope is a man who has emerged from a century-long hibernation to find he has been heroically idealized beyond belief.
Captain John “Black Jack” Geary’s legendary exploits are known to every schoolchild. Revered for his heroic “last stand” in the early days of the war, he was presumed dead. But a century later, Geary miraculously returns from survival hibernation and reluctantly takes command of the Alliance fleet as it faces annihilation by the Syndics.
Appalled by the hero-worship around him, Geary is nevertheless a man who will do his duty. And he knows that bringing the stolen Syndic hypernet key safely home is the Alliance’s one chance to win the war. But to do that, Geary will have to live up to the impossibly heroic “Black Jack” legend.

Recommendation: I love this series.

END_OF_DOCUMENT_TOKEN_TO_BE_REPLACED

Jared? Is that you? It’s just been so long I didn’t recognize you.

It’s a little weird to think that the thing that finally brings you out of hiding is a romance. 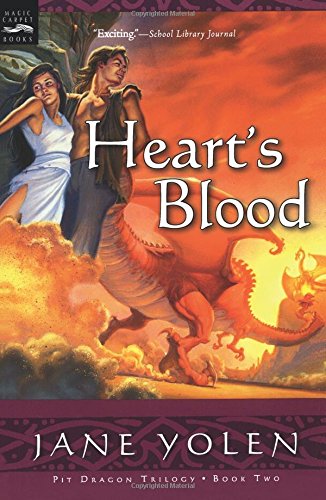 END_OF_DOCUMENT_TOKEN_TO_BE_REPLACED

Just a quick review of a “lad lit” novel I read on Saturday. Well I listened to it but same thing.

Series: The Don Tillman Series; Book 1
Author: Graeme Simsion
Genre: Romance, Lad Lit
Audience: Adult
ROTS Setting: Austraila, modern, no-mag
Synopsis: A first-date dud, socially awkward, and overly fond of quick-dry clothes, genetics professor Don Tillman has given up on love, until a chance encounter gives him an idea.
He will design a questionnaire – a 16-page, scientifically researched questionnaire – to uncover the perfect partner. She will most definitely not be a barmaid, a smoker, a drinker or a late-arriver. Rosie is all these things. She is also fiery and intelligent, strangely beguiling, and looking for her biological father – a search that a DNA expert might just be able to help her with.
Recommendation: For some reason, this book made me really happy. I loved it. I

END_OF_DOCUMENT_TOKEN_TO_BE_REPLACED

I read an abridged/short story version of this in school and had no clue there was a (slightly) bigger version out there for the longest time. Finding it has been nearly impossible but I figured it out eventually.