With book 5, The Dark Talent, coming out this past week I’ve been trying to get through the previous books I hadn’t read yet. That would be this one, The Knights of Crystallia, and The Shattered Lens. I made sure to get on the hold list for book 5, and should get one of the first few copies but I don’t know how long it will take to get them into circulation. My last experience was about 3 weeks but this is the new system that is much larger and hopefully more efficient. 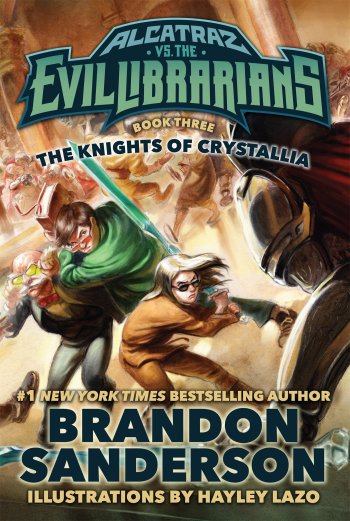 Title: The Knights of Crystallia
Series: Alcatraz Versus the Evil Librarians; Book 3
Author: Brandon Sanderson
Genre: Fantasy
Audience: Youth
ROTS Setting: EU, Modern, No Higher Magic, Dragons
Synopsis: Alcatraz as survived the fabled Library of Alexandria, and successfully rescued his father. Now he’s finally arriving in Nalhalla, one of the Free Kingdoms and home of his birth. But the Evil Librarians are already there poised to seize one of the other kingdoms in the name of peace. Can Alcatraz unravel the plot in time? Will his own ego prevent him from entering the building? Or will Bastille have to save them all?…..Again.
Recommendation: Early teens or moderately skilled readers.

You might notice the change in naming convention used for this book and the series along with the new cover style. While I think that both are a great improvement, I am frustrated at the need to change in the middle reviewing the series. Honestly, you’d think they’d learn from those evil/recovering librarians.

So I’m a little disappointed.

In general the book wasn’t as entertaining as the two before it. The first introduced everything so it’s all new and shiny. The second was amazing because you got to use all the new shiny, but also in this case the book was very adventure based and there was lots more Bastille. This one was a lot of preparation, which means explanations and arranging the characters so they will be ready for the series crisis book (#4) and the climax and resolution book (#5).

Dragons. Yep there are dragons in this universe. Which means this series is awesome unless the author purposefully ruins it. Preservation help us.

To end this pathetic review, I think Alcatraz’s Dad is the bad guy of the series. (Sure the Evil Librarians are evil and they’re still bad, but I don’t think they’re the bad guys.) I sort of was getting that vibe at the end of the last book, but nothing in this book contradicted those vibes. I also have a sneaking suspicion that Alcatraz’s Mom is a good guy. There’s just too many loose threads, and unanswered questions. And that doesn’t even get into the crazy amounts of foreshadowing that’s nearly every other word.

More to read and so little time to do it. Later.