The Underland Chronicles by Suzanne Collins have been part of my life since I was in 5th grade. After lunch we always had 20 minutes of quiet reading time, and then our teacher would read to us for another 20 or so. This is what she used to read, doing dramatic voices for all the characters and everything! 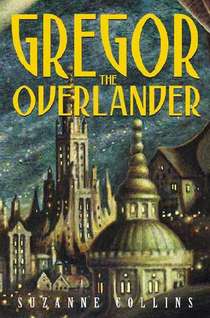 Series: Underland Chronicles, Vol. 1
Author: Suzanne Collins
Genre: Children’s Fantasy
Audience: Upper Elementary school
ROTS Setting: Expanded Universe, Prophetic magic, Underground Dystopian,
Synopsis: Embark on an epic adventure with Gregor and Boots  in the unknown vastness of the Underland, a place of uneasy coexistance between people and enormous sentient iterations of classic New York pests. Follow a centuries-old prophecy to find “..the one lost up ahead…”, braving turbulent waters, new nemeses, and stinky toddler diapers.
Recommendation: Love it! Recommended for 11-14 year old kids, specifically boys, as it is from a male perspective. Jared seemed to enjoy it ok, and yes, Robert, you should read it too!

Let’s talk characters for a minute, guys. Part of the reason I love this book and series so much and have read them ten times is the character depth and development. Boots is your typical lovable chatty two year old that is friends with everyone and everything, and is the reason the adventure all happens in the first place. Gregor is her eleven year old brother, who is incredibly mature and responsible for his age. He has had to be the ‘Man of the House’, babysitting his sisters and taking care of his grandma with Alzheimer’s for two years, seven months and thirteen days, since his father inexplicably went missing. Louxa, a sassy spitfire of a pre-teen girl, is the royal heir of Regalia, and cousins with Henry, a fun-loving, prank-pulling nobleman. I quite enjoy the change and growth you see in all the characters through the story, while they still keep their original qualities, if that makes sense.?.?

There are two settings in this series- the city of New York, namely Gregor’s apartment building and Central Park, as well as the Underland, which is an entire civilization lying quietly unknown under North America. As you’ll quickly discover, the Underland is divided into various lands, belonging to the Humans in the city of Regalia, who are close to the settlement of the Bats. The Crawlers, the Gnawers, and the Spiders all have lands of their own, ranging from arid open desert, to narrow close caves. One of the only downsides I have noticed about the setting is the lack of measurable distance between places. To my knowledge, things are talked about as being ‘X number of hours of flying time’ by Bat away.

I really enjoyed that this book serves as a gateway introduction to the Underland world, having you meet at least one individual of most species, with an Underland human’s perspective on them to serve as a human bias, as well as their own perspective of their species equally laid out. This lends itself quite nicely to letting you as the reader decide who the true villains are.

I didn’t even make the name association of the author connection until I read this again in about 2014- it was written by Suzanne Collins, author of the Hunger Games trilogy. Kinda fun, feeling like a bit of a literary hipster, having read something before the author became incredibly famous.

2 thoughts on “Underland Chronicles – Gregor The Overlander – By Suzanne Collins”