This is it. The end of the series. I’ve been eat, sleep, and…..other stuff, this series for weeks. I am more hyped than ever for Dragonwatch. I’ve pre-ordered it and if all goes well you should expect a review this Friday, Mar.17.2017. 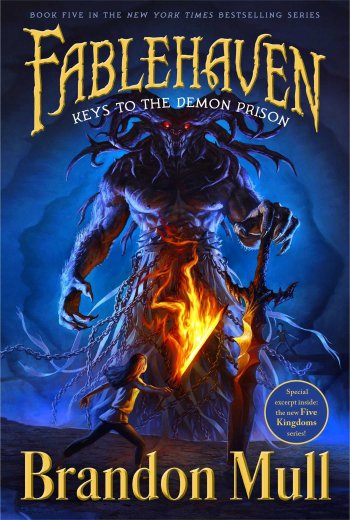 Title: Keys to the Demon Prison
Series: Fablehaven; Book 5
Author: Brandon Mull
Genre: Fantasy
Audience: Youth/Teen
ROTS Setting: EU, Modern, Magic, Fairies, Demons
Synopsis: The final battle between Light and Darkness looms. Desperate, reckless moves are all that’s left to try and prevent the demon prison from opening. Can Kendra and Seth prevent the all but inevitable? Either way, they will risk all in the attempt.
Recommendation: Highly recommend this series. Early teens and up can easily handle this book. I advise moderate caution with younger readers as there are some darker themes.

So many plans come to fruition in this book and not all of them those you might expect. There are some satisfying twists and just enough hope to keep you going. The ending was good as a whole but there were elements I didn’t like. The lead up to that ending though was very good.

Kendra is my biggest disappointment in the series, her role in the ending events are no different. She usually stands around waiting until someone confronts her directly then magically flattens all opponents. As mentioned before, she’s much the same character she was at the beginning of the series. She’s also inherently passive, with her magic abilities being her only real contribution. Her, near constant, boy troubles only seemed to reinforce her helplessness.

Seth is the rock and rock star of the series. Where he was to who he became has been amazing to watch. A brat with an authority complex becomes a real life hero. His abilities don’t define him but he makes use of them in a way that’s entirely Seth.

The Sphinx is also one of the most dynamic characters in the series. So many layers. He’s a whole person and the strongest secondary character in the series.

This world of magic is so vast and vivid that it’s difficult to see where it could possibly end. There’s so much nuance that more books in the world makes sense. The dual nature of it, wonder and danger captivates me and I want more.

In summary, this series is great. It is appropriate for many ages and reading levels. The characters are real, Seth providing many lessons. I can not praise it enough and unless Dragonwatch is disturbingly different, you can expect more from this amazing world.

<< Review of Secret of the Dragon Sanctuary; Book 4