It’s good to see you finally writing, both reviews and some of your own projects.

This review has been really difficult to write. I was generally OK with the book, but steadily became more dissatisfied as time went by. Thus the super late timing of this post. Sorry, not sorry. 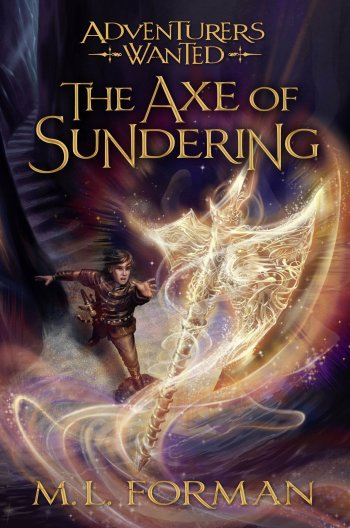 Title: The Axe of Sundering
Series: Adventurers Wanted; Book 5
Author: M. L. Forman
Genre: Fantasy
Audience: Youth
ROTS Setting: EU/AU, Medieval, Higher Magic, Dragons
Synopsis: Whalen Vankin is the world’s greatest wizard, and he has only ever personally trained two other wizards. One is Alexander Taylor, a young man who has earned a reputation as a brave adventurer, a warrior, and man of honor. The other is Jabez, Vankin’s nephew and a man whose choices have led him down a different, darker path. Dark magic has covered Westland, and evil is stirring. Whalen and Alex must journey together into the heart of danger, confronting a sea serpent, battling their way through a goblin army, and facing down more than one dragon. Alex must find the legendary Axe of Sundering the one weapon that offers a chance to defeat Jabez and protect the land from the dark wizard’s plans. But finding it will be an adventure of its own as the only pathway to the Axe leads through the underground tunnels and secret passages of Castle Conmar. But Jabez has one final weapon at his disposal: the powerful Orion Stone, which could spell the end to Whalen and Alex both.
Recommendation: Highly recommend this series (just not the ending). Great for younger and older readers alike.

First, I’m a little disappointed in this book and it’s not just because I hyped it up. In fact I had zero expectations for it, my excitement was solely that the series would have a resolution after all the delays and health issues that Mr. Forman had. My disappointment is that it doesn’t feel like a single cohesive story and is more like the logical continuation of the series with the series ending tacked onto the end. I don’t know if this book was always supposed to be the end of the series but as a whole it doesn’t feel like it……at all.

The story picks up right where the last one ends, at a major cliffhanger. Then promptly has the character wait a month before picking up again. Not the best of starts. Basically, we get a story of Alex needing to help one of his dearest friends. That’s what takes up 80% of the book. Which on it’s own is decent and might have been pretty good if it had the whole book to work with. The last 20% is Alex discovering, fighting and then defeating the super bad ultimate evil. Ending the series. An evil they had no information on or even an inkling of the mad genius plan before hand. Alex literally blunders in and then beats them all…..Pretty much no nuance.

If I had to guess I would say that this was intended to be a bigger series, at least 7 books or longer. Then with Mr. Forman’s sudden health concerns I think this book was quickly reconfigured so the series would have an end. Just in case.

Now the ending also made it clear that Alex’s story was not over and there was plenty of foreshadowing throughout the series indicating that there were many things he was going to do in his life. However, I have zero interesting in following his character further. He’s basically a god now. Not literally but the author has written him into a corner, several in fact. Basically Alex is the most powerful single individual in the world, probably ever. Every book Alex got more powerful and picked up more powerful tools/weapons. At this point, I can’t see anything being more than a minor speed bump for him.

Having said all that, I would love to dive back into the world. There is tons of potential and the whole concept is amazing. If the author wanted to do a couple of one-shots then I’d be down with that. I’d also be curious if he’ll attempt to do another series and if so, I wonder if he’ll write the whole series before publishing anything and if it will be a direct sequel or from a fresh start.

In summary it was a good series with a very unsatisfying ending. It features a world richly populated with a diverse collection of characters, cultures and histories that are ripe with treasure and adventure.