This book is one trippy ride. But in amongst the layers of crazy there’s an internal logic that manages to pull it altogether. It’s a feat of extreme skill and a slightly unhinged imaginative mind…..so, perfectly Garth Nix. 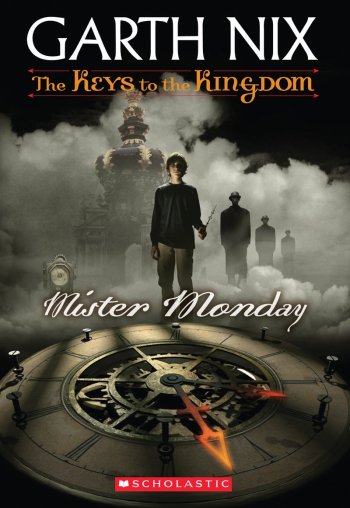 Title: Mister Monday
Series: The Keys of the Kingdom; Book 1
Author: Garth Nix
Genre: Fantasy
Audience: Youth
ROTS Setting: EU, Magic (sorta)
Synopsis: Arthur Penhaligon’s first days at his new school don’t go too well, particularly when a fiendish Mister Monday appears, gives Arthur a magical clock hand, and then orders his gang of dog-faced goons to chase Arthur around and get it back. But when the confused and curious boy discovers that a mysterious virus is spreading through town, he decides to enter an otherworldly house to stop it. After meeting Suzy Blue and the first part of “the Will” (a frog-looking entity that knows everything about the House), Arthur learns that he’s been selected as Rightful Heir to the House and must get the other part of the clock hand in order to defeat Monday. That means getting past Monday’s henchmen and journeying to the Dayroom itself. Thankfully, Arthur is up to the challenge, but as he finds out, his fight seems to be only one-seventh over.
Recommendation: I would recommend this book for youth, 8-12yrs.

The world and setting are just to strange and twisted for me to even attempt to explain them here. I can barely keep them all straight except for the simplest of details, but suffice to say, it’s a quirky world filled with strange people who follow odd rules and yet it all makes sense in the end.

As for the main character, Arthur Penhaligon, an ordinary 12 year old with a severe case of asthma. I actually kind of like him. He’s got some depth and detail while still remaining likable. He readily accepts his weaknesses and then moves on because stuff happens and can’t be fixed unless he does something. No superhuman but still has the heart of a hero.

The plot easily leads into the series. We get introduced to everything and we know fate won’t let go of Arthur until it’s all over. Pacing was also a good balance of new info and action. Top notch.

In summary, there isn’t anything about this, other than the strange setting, that should turn readers away. Solid characters, plot, pace and the promise of so much more. I will be continuing with this series in the future.