It’s not my favorite book in the series, I think there’s just a bit too much going on, but it was an amazing end to the series! 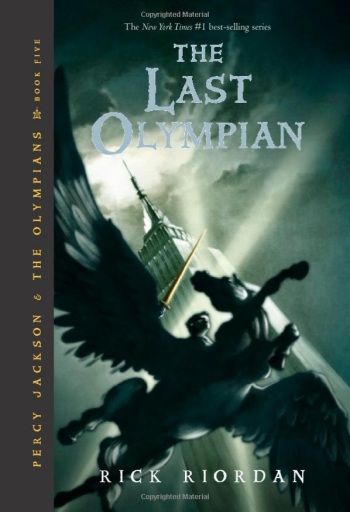 Title: The Last Olympian
Series: Percy Jackson and the Olympians; Book 5
Author: Rick Riordan
Genre: Fantasy
Audience: Youth/Teen
ROTS Setting: EU, Modern, Magic, Mythology/Supernatural
Synopsis: All year the half-bloods have been preparing for battle against the Titans, knowing the odds of victory are grim. Kronos’s army is stronger than ever, and with every god and half-blood he recruits, the evil Titan’s power only grows. While the Olympians struggle to contain the rampaging monster Typhon, Kronos begins his advance on New York City, where Mount Olympus stands virtually unguarded. Now it’s up to Percy Jackson and an army of young demigods to stop the Lord of Time.
Recommendation: Highly recommended!

Soooooo many things happen. The Rachel Dare plot has to be resolved, then there’s Nico, plus the whole Annabeth/Percy relationship, and of course the main plot with it’s awesomeness. There’s also a couple of sub-plots such as with Clarissa and the secret spy in Camp. It really needed to be a bigger book regardless of how fast it all had to happen. (And there’s totally another book’s worth of material that had to happen right before this book.)

Percy begins to get a little annoying in this book. It’s hardly noticeable but it’s definitely there. Annabeth is a bit weird too, weirder than normal.

The plot is good but with a few too many loose ends that needed chasing down. At this point it’s clear a sequel series has been planned and it feels like a huge amount of effort was put into setting it up that could have been better spent elsewhere. Lastly, I thought the climax and resolution felt a bit hollow. I’m not left entirely satisfied and I don’t really know why.

In the end it was extremely entertaining and it was a worthy end to the series. I know, after all that moaning I actually enjoyed myself. It’s really a very, very good series with simple morals with plenty of wit and action. Truly an icon series for the genre.