Ok, maybe it was me but I kept thinking this book was going to end the series….and it didn’t. So my feelings are a bit conflicted. 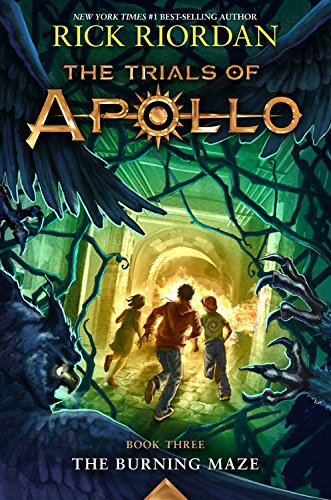 Title: The Burning Maze
Series: The Trials of Apollo; Book 3
Author: Rick Riordan
Genre: Fantasy
Audience: Youth/Teen
ROTS Setting: EU, Modern, Magic, Mythology/Supernatural
Synopsis: The formerly glorious god Apollo, cast down to earth in punishment by Zeus, is now an awkward mortal teenager named Lester Papadopoulos. In order to regain his place on Mount Olympus, Lester must restore five Oracles that have gone dark. But he has to achieve this impossible task without having any godly powers and while being duty-bound to a confounding young daughter of Demeter named Meg. Thanks a lot, Dad. With the help of some demigod friends, Lester managed to survive his first two trials, one at Camp Half-Blood, and one in Indianapolis, where Meg received the Dark Prophecy. The words she uttered while seated on the Throne of Memory revealed that an evil triumvirate of Roman emperors plans to attack Camp Jupiter. While Leo flies ahead on Festus to warn the Roman camp, Lester and Meg must go through the Labyrinth to find the third emperor—and an Oracle who speaks in word puzzles—somewhere in the American Southwest. There is one glimmer of hope in the gloom-filled prophecy: The cloven guide alone the way does know. They will have a satyr companion, and Meg knows just who to call upon. . . .
Recommendation: Still recommended, but only barely.

The series will have at least 5 books since there were still two “oracles” that needed saving at the end of the book……I suppose that might be a spoiler but not really. This fits with the lengths of Percy Jackson and Heroes of Olympus.

Which makes this the middle book, which I can kind of see.

Apollo was the most annoying part of the book. Two books down and he hasn’t really changed beyond a few statements of emotion sprinkled here and there. What was once charming has begun to sour. It even felt like he’d regressed at the beginning of this book.

Meg had some huge developments but also a bit too much resolution. I literally have no interest in seeing her develop further and feel myself annoyed knowing she’s got at least one more big event happening before the series ends.

Grover tags along for part and could have used a whole novella to himself. Instead there are some weighty hint and we move on. Same goes for the other established characters. All of them were extremely unsatisfying.

As for plot, it was decent. It could have used a more cohesive structure and felt a bit repetitive and meandering. Overall it was sufficient but the dryad ex machina was entirely unsatisfying. I wish that had been kept for a time when it could have really mattered.

Lastly, we get WAY less political commentary. It still makes several relevant comments about current society but it didn’t feel pushy or over done. Basically, it said it without going out of it’s way to SAY it. Probably the single biggest sign of hope for the rest of the series for me and my biggest complaints from the previous books and Magnus Chase. I can only hope Hyperion/Disney are finally getting the hint.

In summary, it was a bit meh but I was still able enjoy myself. And yes, I will be continuing with the series. I’m more interested in what state the universe will be in once the series ends, but whatever.

<< Review of The Dark Prophecy; Book 2