I hate it when a series starts out strong and then nosedives the first chance it gets….meaning the second book. 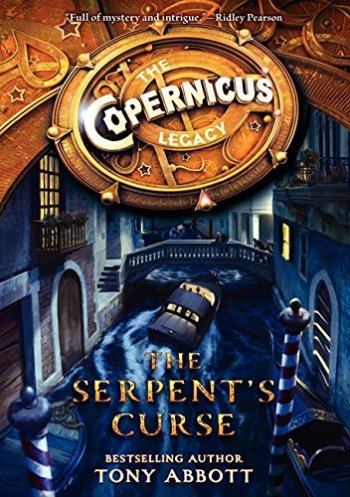 Title: The Serpent’s Curse
Series: The Copernicus Legacy; Book 2
Author: Tony Abbott
Genre: Fantasy/Science Fiction
Audience: Youth
ROTS Setting: CU, present day, astronomy
Synopsis: Wade, Lily, Darrell, and Becca may have found the Copernicus Legacy’s first relic—a beautiful blue stone named after the constellation Vela—but they have lost much more than they have gained. Darrell’s mother, Sara, has been kidnapped by Galina Krause, the conniving leader of the Teutonic Order, who hopes that the renowned academic will lead her and her minions to the next relic.
Recommendation: Not recommended.  It’s still a decent read, and good for younger readers, but it’s generic and the quality tanked.

The first book was almost shockingly good, especially knowing that it would eventually be cut well short of the 12 books alluded to in the book and every marketing material I’d seen on the series. The second book explains a lot.

This book is painfully slow to get started. It skips a few points that I thought were important and yet drags on before getting to anything juicy. Both too late and too early.

The characters were a highlight of the first book and were woefully brutalized by the author. What had been a real person was boiled down to a few characteristics and juggled throughout the entire book. Every time I started to connect with a character the POV changed! It wasn’t uncommon to have 5+ POV changes in a chapter which was wildly distracting.

As for the plot…..it meandered. In the first book it felt like everything was pointing towards a single event. We don’t get that here. The end simply sprung up. I am left feeling unsatisfied and a little put-out by the whole thing. It wasn’t a string of clues wound far and wide with tenuous connections. Instead we got a few pebbles thrown in a pond and called a map.

Lastly, there was a lot of external help. A lot. To the point that it made no sense for the group to even be participating in any of the events. It wasn’t a bootstrap underdog story anymore. It lost much of the charm of the first book.

In summary, it’s an OK book. Read it if you want but I’ve seen enough.