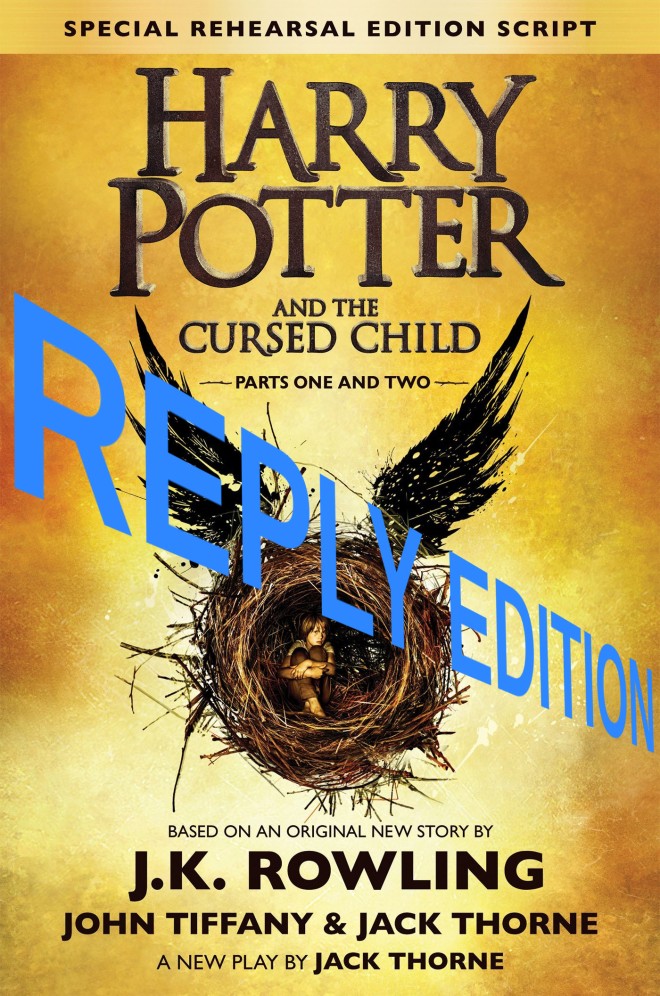 -HOUSE ELF TREMMORRS the need to immediately stop reading and begin to clean the house trying to forget what you have just read.

-VAMPIRE CHILLS sudden lack of interest in your magical research and the need to fangirl over sparkly vampires.

YOU HAVE BEEN WARNED.

So I noticed that you seem to have a very negative view of HP#8. I did not pick apart the script until after I have read the whole thing. But since I was expecting it to be pretty awful and not really going to live up to the hype I thought it was really good. It was nice to see where the Trio got off to and how their kids turned out. Honestly though if kids used this to determine how cool being an adult it… it sucks. In HP being an adult is bland and boring. Harry and Ginny could be anywhere doing anything. They could be teaching abroad they could be traveling to far off places, searching for treasure, hunting warlocks..anything. But nope like a bunch of Englishman they go home make babies and go to their boring jobs. The same is true for Hermione and Ron. Draco having so much emotional damage after the battle of Hogwarts makes sense spending time recuperating and being with his wife and son.

Parenting and the lack there of. Harry is a bad parent. Ginny is an OK parent. Hermione is too busy to parent (probably what she wanted the time turner for to go back and spend more time with her kids.). Ron is just so out of place, it seemed like he was forgotten and JK went back and added him in. Draco who spent loads of time with his son teaching and loving his kid and Scorpius turns out real and normal and smart. Popularity, which Draco sought in school he taught his son doesn’t really matter friendship does. Oh and back to the Potter’s you are right that James is a jerk and Albus had too many pressures added to him by his parents.

Really honestly with how flat and boring the characters are and how predictable and uneventful the plot is I don’t understand how this can be considered Harry Potter book 8. It in no ways is on par with the other 7 Harry Potter books and stories. I think it is much closer to Quidditch Through the Ages, Fantastic Beasts and Where to Find Them, and the Potter more books. In quality, style, length, and feel. This doesn’t really feel at all  like a J.K. Rowling epic. If she were to write an 8th book it inevitably would be the trio going back and finishing their schooling or maybe Harry going to Auror school while still having time for his friends. This is a marketing ploy and all the fun cool parts happened by accident instead of by design.

Time is “a big ball of wibbly wobbly… time-y wimey… stuff.”-Doctor Who, and really shouldn’t be messed with. This COULD have been a fantastic story but when they decided to have time travel be the main plot device then it turned into something a high school student could have written. Also the time travel in this book is fundamentally different from what we see in HP book 3: Prisoner of Azkaban where we see that time is self-fulfilling and can not be changed.

Now a brief recap of everything that Cursed Child teaches us. Harry Potter only has 7 books. Adults are and being an adult is boring. Parenting should not be a priority over work, it also boring and undesirable. If you can time travel, don’t. JK is a sell out trying to make more money without any consideration for her fans or the integrity of her work.

2 thoughts on “REPLY EDITION – HARRY POTTER AND THE CURSED CHILD”