Since I read the Divergent series a few years ago and moderately enjoyed them I was intrigued enough to give Carve the Mark a try. 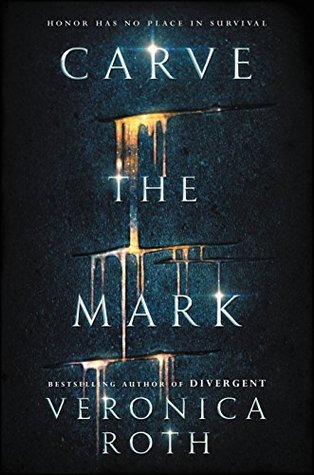 Series: Carve the Mark; Book 1
Author: Veronica Roth
Genre: Science Fantasy, Young adult, romance
Audience: Teen
ROTS Setting: AU, Space Travel,
Synopsis:In a galaxy powered by the current, everyone has a gift.
Cyra is the sister of the brutal tyrant who rules the Shotet people. Cyra’s currentgift gives her pain and power — something her brother exploits, using her to torture his enemies. But Cyra is much more than just a blade in her brother’s hand: she is resilient, quick on her feet, and smarter than he knows.
Akos is the son of a farmer and an oracle from the frozen nation-planet of Thuvhe. Protected by his unusual currentgift, Akos is generous in spirit, and his loyalty to his family is limitless. Once Akos and his brother are captured by enemy Shotet soldiers, Akos is desperate to get this brother out alive — no matter what the cost.
The Akos is thrust into Cyra’s world, and the enmity between their countries and families seems insurmountable. Will they help each other to survive, or will they destroy one another? (summary from Goodreads)
Recommendation: Teens would really like this book. Not a bad book just not that great either.

So first a question. If a book is well done but it is predictable and tells a very typical story is it still good? This is the question that has haunted me since I started reading Carve the Mark. Thankfully I listend to the audiobook without reading anything about the book in advance.

The world setting is really the best part of this book. The current runs through the universe and in his one solar system life exists. It powers all the technology and gives gifts to all of the inhabitants. There are multiple worlds each with a unique culture. The book takes almost entirely on the planet Thuvhe/Shotet. Thuvhe is a very peaceful nation with normal sort of people. The Shotet on the other hand, are violent scavengers seeking recognition. I liked the blend of technology and hand to hand fighting. My only argument is that basically no effort was made to explain the tech. Just it is powered by the current. Also because it is a teen novel a lot of effort is placed on the relationship and characters which really made the fantastic setting seem lack luster.

Then there was everything else. The plot is a basic Romeo and Juliet with a few differences. The personalities of the characters were exactly what was expected. We of course, get the perspectives of Akos and Cyra, mostly Cyra. The most startling things are how violent some of the scenes are and at times coming from those close to the main characters.

So a like I said at the beginning a well-done book but always seemed to be reminding me of something else. Like I’ve read it before. If you get around to reading it you’ll have to let me know what you think.

One thought on “Book 1 – Carve the Mark – Veronica Roth”