I really want to get this out so it’s going up on an unusual day. The book and I need some space to cool off. 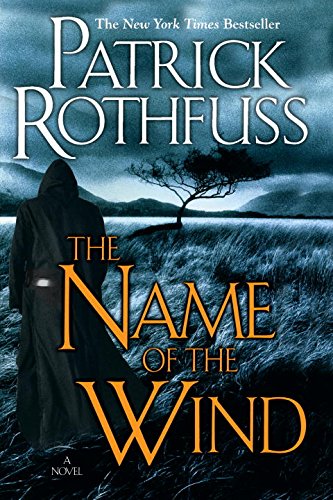 Title: The Name of the Wind
Series: The Kingkiller Chronicles; Book 1
Author: Patrick Rothfuss
Genre: Fantasy
Audience: Adult
ROTS Setting: UU, Medieval, Higher Magic, Dragons (sort of)
Synopsis: Told in Kvothe’s own voice, this is the tale of the magically gifted young man who grows to be the most notorious wizard his world has ever seen. The intimate narrative of his childhood in a troupe of traveling players, his years spent as a near-feral orphan in a crime-ridden city, his daringly brazen yet successful bid to enter a legendary school of magic, and his life as a fugitive after the murder of a king form a gripping coming-of-age story unrivaled in recent literature. A high-action story written with a poet’s hand, The Name of the Wind is a masterpiece that will transport readers into the body and mind of a wizard.
Recommendation: This book is In Dispute due to the contrasting public and personal opinion of the reviewer.

It’s not a complete story…..at all. It’s the first third of story. There isn’t an end, just a giant middle finger or To Be Continued like it’s some TV mini-series. Nothing is resolved, nothing is explained, it built to nothing, and I’m left with questions that should have been answered already. Why is Kvothe so important? Why is his life significant? You can’t go a whole book with that as a premise and not tell us anything concrete. The author teased far too much and gave too little satisfaction. There’s no payoff to reading this book.

This book felt like an original fanfiction. A lot of talking about things the author finds interesting or important but not much else. The plot has a washboard feel instead of building up to a single important event and then falling away with resolution. As a whole the writing is amateurish in that it’s not concise. Why use a thousand words when a hundred would suffice? This plethora of words means that very little information is conveyed. I know very little about the world, or the most superficial of culture and have only a cursory knowledge of it’s important/mythical history. This is more a story about poverty than it is about magic. I read fantasy for the magic, for experiencing something new and I don’t see anything magical or new here.

Kvothe is more a collection of fanfiction clichés than a real person, especially once he gets to the University. He’s OP in almost every way except self control or when the author wants to cause drama and then he can’t string two sounds together to form a word. If he’s not being superior then he’s being deliberately stupid. There’s no in-between.

Denna is the worst person to try and make a romance with. Literally, the only reason she is there is to fulfill that literary need and cause problems for the MC. Oh, she’s an extraordinarily deep and complex character. Great job, Mr. Rothfuss. But her use is transparently obvious. A dangling carrot works only on the simplest of creatures.

Half of the magic system is fairly unique and has some real dynamic uses…….That would be sympathy magic…..which we’re told is not “true magic”. It involves creating connections with things and has a wide array of practical applications. The other half? Using names to change the world……Ya, so unique I can think of two books that use that exact system, arguably, better.

And yet I want to read the next book. Not because this one was good, but because I’m completely unsatisfied and was promised that if I just read the next book it would make me all better. That’s the danger of this book. It provides very little except more promises which we happily accept and forget it’s lack of substance. How can this be compared to Earthsea, GoT, Harry Potter, or LotR? LotR is a world so broad and detailed it makes my brain bleed just thinking about it. GoT has a world so real you could touch it with characters so interwoven it’s hard to figure out where one ends and the other begins. Harry Potter is filled with magic, wonder, and whimsy. Earthsea has a prose so firmly entrenched it feels more like the landscape. I’ve read 3 of those and this book doesn’t hold a candle to the freaking sun! It’s like reading Philosophers Stone and ending it when he gets to Diagon Alley. It’s like ending The Fellowship of the Ring and they haven’t left the Shire. It’s like ending A Game of Thrones before the Starks make it to Kingslanding. It’s like ending A Wizard of Earthsea just after Sparrowhawk met the Master of Naming for the first time. I think I’m more pissed to think that this book is considered by so many people to be the best fantasy novel in the last 30 years than anything else.

For a debut novel it’s very good. For the first book in a series it’s decent. But as the second-coming-of-Tolkien himself it is not. At best this book is 3 1/2 stars, but I’d put it closer to 2. Will I read the next one, sure. It’s sitting on my shelf. Had it not been I probably wouldn’t. I don’t know if I can trust reviews on this series because they are so obviously skewed.

4 thoughts on “The Kingkiller Chronicles – Book 1: The Name of the Wind – By Patrick Rothfuss”