So I found this book on audible and it looked kinda interesting, what really sold me was the Sample of the book which talked about Bob who waking up can remember being hit by a car but nothing after. He attempts to talk with a shrink who was waiting for him to wake up. Unfortunately, he is talking with a synthesized voice. What happens next is amazing. 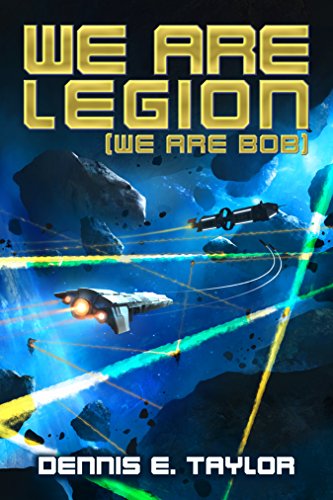 Title: We Are Legion (We Are Bob)
Series: Bobivese; Book 1
Author:  Dennis E. Taylor
Genre: Sci-Fi
Audience: Teen
ROTS Setting: Future
Synopsis: Bob Johansson has just sold his software company and is looking forward to a life of leisure. There are places to go, books to read, and movies to watch. So it’s a little unfair when he gets himself killed crossing the street. Bob wakes up a century later to find that corpsicles have been declared to be without rights, and he is now the property of the state. He has been uploaded into computer hardware and is slated to be the controlling AI in an interstellar probe looking for habitable planets. The stakes are high: no less than the first claim to entire worlds. If he declines the honor, he’ll be switched off, and they’ll try again with someone else. If he accepts, he becomes a prime target. There are at least three other countries trying to get their own probes launched first, and they play dirty.
The safest place for Bob is in space, heading away from Earth at top speed. Or so he thinks. Because the universe is full of nasties, and trespassers make them mad – very mad.
Recommendation: I would definitely recommend this book.

I loved We are Bob. Bob is funny and interesting. As the book goes on you really get to see the different sides of his personality. I like that he is a nerd so we get star wars and other references like that.

Most of the book takes place in the future which seems really high tech at the same time I feel like it is more of a true sci-fi.

The plot is where this book broke down a little. At first, we seem to have a relatively focused plot. But about the halfway point we just lose it. A dozen things are happening and you cant keep track of who is where or what is happening or who that person is even.

But all in all, it is a really fun read. I would defiantly recommend this for late teen to adult. Also, people who like space stuff and science. He got into details and in a few places, it went way over my head. It could have been gibberish and I wouldn’t have known. But it sounded smart.