Once again, I press on……..and it is glorious. 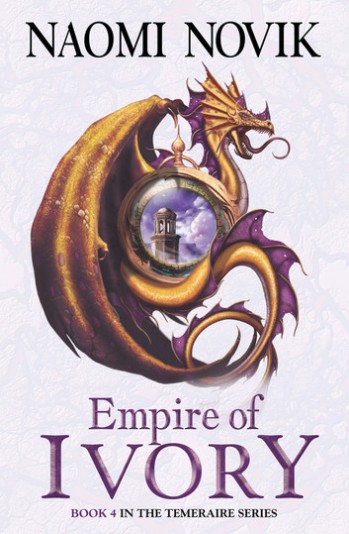 Title: Empire of Ivory
Series: Temeraire; Book 4
Author: Naomi Novik
Genre: Alternate History/Fantasy
Audience:Young Adult/Adult
ROTS Setting: Alternate History: Early 1800s, Dragons, Naval Ships
Synopsis: Tragedy has struck His Majesty’s Aerial Corps, whose magnificent fleet of fighting dragons and their human captains valiantly defend England’s shores against the encroaching armies of Napoleon Bonaparte. An epidemic of unknown origin and no known cure is decimating the noble dragons’ ranks–forcing the hopelessly stricken into quarantine. Now only Temeraire and a pack of newly recruited dragons remain uninfected–and stand as the only means of an airborne defense against France’s ever bolder sorties. Bonaparte’s dragons are already harrowing Britain’s ships at sea. Only one recourse remains: Temeraire and his captain, Will Laurence, must take wing to Africa, whose shores may hold the cure to the mysterious and deadly contagion. On this mission there is no time to waste, and no telling what lies in store beyond the horizon or for those left behind to wait, hope, and hold the line.
Recommendation: I surprisingly/not surprisingly have fallen in love with this series. Highly recommend it.

….This is my least favorite book in the series, so far. And it has nothing to do with it being bad or poorly done or obnoxious characters. It was none of those things, I just didn’t like it as much as the others.

The timing and pacing were a bit off for me and the parts I really enjoy seemed to be glossed over.

But it was still a good read in a great series!