Once again, I press on……..and it is glorious.

Title: Empire of Ivory
Series: Temeraire; Book 4
Author: Naomi Novik
Genre: Alternate History/Fantasy
Audience:Young Adult/Adult
ROTS Setting: Alternate History: Early 1800s, Dragons, Naval Ships
Synopsis: Tragedy has struck His Majesty’s Aerial Corps, whose magnificent fleet of fighting dragons and their human captains valiantly defend England’s shores against the encroaching armies of Napoleon Bonaparte. An epidemic of unknown origin and no known cure is decimating the noble dragons’ ranks–forcing the hopelessly stricken into quarantine. Now only Temeraire and a pack of newly recruited dragons remain uninfected–and stand as the only means of an airborne defense against France’s ever bolder sorties. Bonaparte’s dragons are already harrowing Britain’s ships at sea. Only one recourse remains: Temeraire and his captain, Will Laurence, must take wing to Africa, whose shores may hold the cure to the mysterious and deadly contagion. On this mission there is no time to waste, and no telling what lies in store beyond the horizon or for those left behind to wait, hope, and hold the line.
Recommendation: I surprisingly/not surprisingly have fallen in love with this series. Highly recommend it.

END_OF_DOCUMENT_TOKEN_TO_BE_REPLACED

Oh ya! China was a nice distraction, but the cannons and dragons are what really pull me into this series. 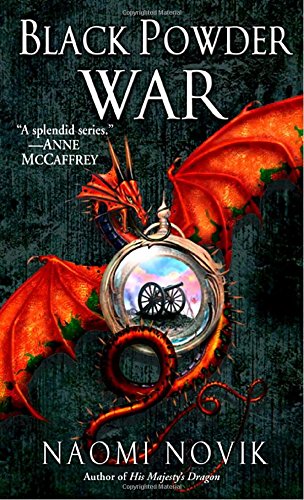 END_OF_DOCUMENT_TOKEN_TO_BE_REPLACED

I am once again completely astonished and enamored with this compelling series. Historical fantasy is not my fancy, but I’ll be making an exception from now on. I need more of these dragons in my life and have already got the next book from the library.

Title: Throne of Jade
Series: Temeraire; Book 2
Author: Naomi Novik
Genre: Alternate History/Fantasy
Audience:Young Adult/Adult
ROTS Setting: Alternate History: Early 1800s, Dragons, Naval Ships
Synopsis: When Britain intercepted a French ship and its precious cargo–an unhatched dragon’s egg–Capt. Will Laurence of HMS Reliant unexpectedly became master and commander of the noble dragon he named Temeraire. As new recruits in Britain’s Aerial Corps, man and dragon soon proved their mettle in daring combat against Bonaparte’s invading forces. Now China has discovered that its rare gift, intended for Napoleon, has fallen into British hands–and an angry Chinese delegation vows to reclaim the remarkable beast. But Laurence refuses to cooperate. Facing the gallows for his defiance, Laurence has no choice but to accompany Temeraire back to the Far East–a long voyage fraught with peril, intrigue, and the untold terrors of the deep. Yet once the pair reaches the court of the Chinese emperor, even more shocking discoveries and darker dangers await.
Recommendation: I surprisingly/not surprisingly have fallen in love with this series. Highly recommend it.

END_OF_DOCUMENT_TOKEN_TO_BE_REPLACED

I have seen the light and it is good! I was blind but now I see!! I’m so glad that you recommended this series and even more so now that I’ve finally read it.

END_OF_DOCUMENT_TOKEN_TO_BE_REPLACED

Meet the conclusion to this bastardly series. 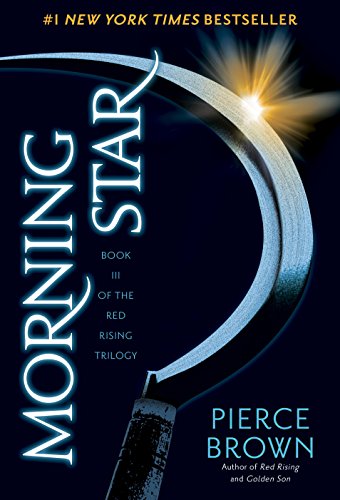 Series: Red Rising Trilogy; Book 3
Author: Pierce Brown
Genre: Fantasy, Sci-fi
Audience: Adult
ROTS Setting: Alternate Future,
Synopsis: Darrow survives the coup, but is taken by the Jackel. What you imagine the Jackel does he does and Darrow suffers. Darrow is broken down to nothing and then must rebuild himself into a new man, or the man he once was.
Recommendation: I do not “Recommendation:” this book. It built up my hopes and then dashed them all away. To build them up again and then have them crashed on the rocks of reality. Of course, this book is only really for adults. It is nice though to have the series finished,  now at least I can sleep at night.

END_OF_DOCUMENT_TOKEN_TO_BE_REPLACED

Series: Red Rising Trilogy; Book 2
Author: Pierce Brown
Genre: Fantasy, Sci-fi
Audience: Adult
ROTS Setting: Alternate Future,
Synopsis: Darrow after winning the Institute is now one of the Peerless Scarred in service to Archgovener Augustus. But all is not easy for him at the Acadamy.
Recommendation: For adults only. Do not read this book, it is evil.

END_OF_DOCUMENT_TOKEN_TO_BE_REPLACED

Oddly this is a book I have read somewhat recently, just 2 years ago. Most of the books I reread have the better part of a decade between reads. I have told you about this series before and it is amazing, but you never read it. So now I’ll detail why this is such a fun series, to make you jealous that I read it first.

Title: His Majesty’s Dragon
Series: Temeraire Series; Book 1
Author: Naomi Novik
Genre: Alternate History/Fantasy
Audience:Young Adult/Adult
ROTS Setting: Alternate History early 1800s
Synopsis: Captain Lawrence captures a French vessel and finds a dragon egg on board, and it’s ready to hatch. Three weeks away from land Captain Lawrence is left with no choice but to try and harness the hatchling to tame it. But when the young dragonet chooses his master the captain’s life is changed forever.
Recommendation: I honestly love this series. I would recommend this for teens or adults. A beautiful mix of nautical, historical, and dragons. For me this got me very interested in the time period. Also from a genealogical stand point learning who our ancestors were and where they lived during the late 18th early 19th century.