It’s a decent book, but it didn’t stand-out. And as it turns out the second book just came out a couple of months ago.

Title: EXO
Series: Exo; Book 1
Author: Fonda Lee
Genre: Science Fiction
Audience: YA
ROTS Setting: CU, Future, Aliens, Technology, FTL, Dystopian
Synopsis: It’s been a century of peace since Earth became a colony of an alien race with far reaches into the galaxy. Some die-hard extremists still oppose alien rule on Earth, but Donovan Reyes isn’t one of them. His dad holds the prestigious position of Prime Liaison in the collaborationist government, and Donovan’s high social standing along with his exocel (a remarkable alien technology fused to his body) guarantee him a bright future in the security forces. That is, until a routine patrol goes awry and Donovan’s abducted by the human revolutionary group Sapience, determined to end alien control. When Sapience realizes whose son Donovan is, they think they’ve found the ultimate bargaining chip . But the Prime Liaison doesn’t negotiate with terrorists, not even for his own son. Left in the hands of terrorists who have more uses for him dead than alive, the fate of Earth rests on Donovan’s survival. Because if Sapience kills him, it could spark another intergalactic war. And Earth didn’t win the last one…
Recommendation: I recommend this series. It’s nothing special, but not bad.

END_OF_DOCUMENT_TOKEN_TO_BE_REPLACED

I had intended to read one of Mr. Westerfeld’s adult novels but discovered it was the third book in the series. Naturally I couldn’t bring myself to jump that far into a new series. Thus I’ve settled for Uglies, one of his more well known series. 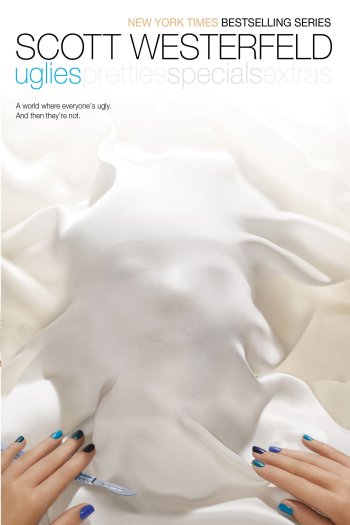 Title: Uglies
Series: Uglies; Book 1
Author: Scott Westerfeld
Genre: Dystopian/Science Fiction
Audience: Teen
ROTS Setting: CU, Near-Future, Dystopian
Synopsis: Tally is about to turn sixteen, and she can’t wait. In just a few weeks she’ll have the operation that will turn her from a repellent ugly into a stunning pretty. And as a pretty, she’ll be catapulted into a high-tech paradise where her only job is to have fun. But Tally’s new friend Shay isn’t sure she wants to become a pretty. When Shay runs away, Tally learns about a whole new side of the pretty world– and it isn’t very pretty. The authorities offer Tally a choice: find her friend and turn her in, or never turn pretty at all. Tally’s choice will change her world forever…
Recommendation: This series is recommended for tween girls.

END_OF_DOCUMENT_TOKEN_TO_BE_REPLACED

So, do you remember when I said Legend might be the best YA Dystopian ever? Prodigy doesn’t live up to it, and I won’t be reading the last book in the trilogy.

Title: Prodigy
Series: Legend Trilogy; Book 2
Author: Marie Lu
Genre: Dystopian/Science Fiction
Audience: Teen/Young Adult
ROTS Setting: CU, Modern/Near-Future, Dystopian
Synopsis: Injured and on the run, it has been seven days since June and Day barely escaped Los Angeles and the Republic with their lives. Day is believed dead having lost his own brother to an execution squad who thought they were assassinating him. June is now the Republic’s most wanted traitor. Desperate for help, they turn to the Patriots – a vigilante rebel group sworn to bring down the Republic. But can they trust them or have they unwittingly become pawns in the most terrifying of political games?
Recommendation: This series is In Dispute for me now. Caution should be taken with this series.

END_OF_DOCUMENT_TOKEN_TO_BE_REPLACED

I’ve been a little MIA the past couple of weeks due to all the holiday stuff and some major life changes in the not too distant future. I’ve found it increasingly difficult to just sit and read, so I’m not making any promises of anymore posts for the year.

Also check out the Brandon Sanderson’s State of Sanderson post if you haven’t already.

Title: Proof of Concept
Author: Gwyneth Jones
Genre: Science Fiction
Audience: Adult
ROTS Setting: CU, Distant-Future, Potential-FTL, AI
Synopsis: On a desperately overcrowded future Earth, crippled by climate change, the most unlikely hope is better than none. Governments turn to Big Science to provide them with the dreams that will keep the masses compliant. The Needle is one such dream, an installation where the most abstruse theoretical science is being tested: science that might make human travel to a habitable exoplanet distantly feasible. When the Needle’s director offers her underground compound as a training base, Kir is thrilled to be invited to join the team, even though she knows it’s only because her brain is host to a quantum artificial intelligence called Altair. But Altair knows something he can’t tell. Kir, like all humans, is programmed to ignore future dangers. Between the artificial blocks in his mind, and the blocks evolution has built into his host, how is he going to convince her the sky is falling?
Recommendation: I do not recommend this book. Nothing particularly wrong with it but I don’t feel it’s worth your time.

END_OF_DOCUMENT_TOKEN_TO_BE_REPLACED

Proof of Concept by Gwyneth Jones

Yep, this is yet another YA dystopian. But I wager it’s one of the best…..ever.

Title: Legend
Series: Legend Trilogy; Book 1
Author: Marie Lu
Genre: Dystopian/Science Fiction
Audience: Teen/Young Adult
ROTS Setting: CU, Modern/Near-Future, Dystopian
Synopsis: What was once the western United States is now home to the Republic, a nation perpetually at war with its neighbors. Born into an elite family in one of the Republic’s wealthiest districts, fifteen-year-old June is a prodigy being groomed for success in the Republic’s highest military circles. Born into the slums, fifteen-year-old Day is the country’s most wanted criminal. But his motives may not be as malicious as they seem. From very different worlds, June and Day have no reason to cross paths—until the day June’s brother, Metias, is murdered and Day becomes the prime suspect. Caught in the ultimate game of cat and mouse, Day is in a race for his family’s survival, while June seeks to avenge Metias’s death. But in a shocking turn of events, the two uncover the truth of what has really brought them together, and the sinister lengths their country will go to keep its secrets.
Recommendation: I would recommended this book for teens, and lovers of dystopians.
[UPDATE: This series is In Dispute for me now. Caution should be taken with this series.]

END_OF_DOCUMENT_TOKEN_TO_BE_REPLACED

Hi Robert,
After we both read book 1 of the Hunter Series I hope my review of book 2 helps us decide if the series is worth it.

Series: Hunter #2
Author: Mercedes Lackey
Genre: Fantasy, Sci-fi, Dystopian
Audience: Teen
ROTS Setting: Alternate Future
Synopsis: Elite Hunter Joy is quite happy hunting and working with other Elite. Sadly it doesn’t last for long. On a secret assignment from her uncle, she uncovers a conspiracy. The who seemed to be so much more of a threat in APEX than on the mountain of her home increase in activity and the safety of the people can no longer be guaranteed.
Recommendation: There are a lot more fight scenes and big ones. So I like it better than the first book. It is definitely a teen dystopian book.

END_OF_DOCUMENT_TOKEN_TO_BE_REPLACED

So I got this as an audiobook from the library and listened on the Overdrive app. 8.5 hours later I know how you feel about this book.

Series: Hunter #1
Author: Mercedes Lackey
Genre: Fantasy, Sci-fi, Dystopian
Audience: Teen
ROTS Setting: Alternate Future
Synopsis: Girl has magic powers and loyal demon followers, easily defeating enemies and challenges while tired and having feelings.
Recommendation: Honestly I am not THAT disappointed.It feels very much like the Divergent Series. It is a Dystopian (the only other one that I’ve read) END_OF_DOCUMENT_TOKEN_TO_BE_REPLACED