Another short read, but not as good as the last one. 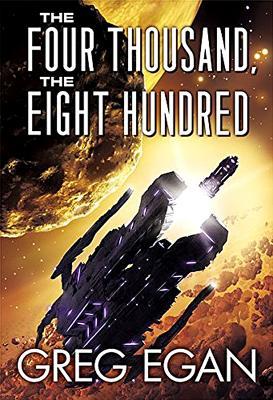 Title: The Four Thousand, The Eight Hundred
Author: Greg Egan
Genre: Science Fiction
Audience: Adult
ROTS Setting: CU, Distant Future, Space Colonization
Synopsis: Camille is desperate to escape her home on colonized asteroid Vesta, journeying through space in a small cocoon pod covertly and precariously attached to a cargo ship. Anna is a newly appointed port director on asteroid Ceres, intrigued by the causes that have led so-called riders like Camille to show up at her post in search of asylum. Conditions on Vesta are quickly deteriorating—for one group of people in particular. The original founders agreed to split profits equally, but the Sivadier syndicate contributed intellectual property rather than more valued tangible goods. Now the rest of the populace wants payback. As Camille travels closer to Ceres, it seems ever more likely that Vesta will demand the other asteroid stop harboring its fugitives.
Recommendation: Recommended but only barely.

END_OF_DOCUMENT_TOKEN_TO_BE_REPLACED

The Four Thousand, The Eight Hundred By Greg Egan