Finally got around to starting this series and I’m surprisingly disappointed. You’re going to need to read this too and tell me if I’m wrong or crazy……or both. 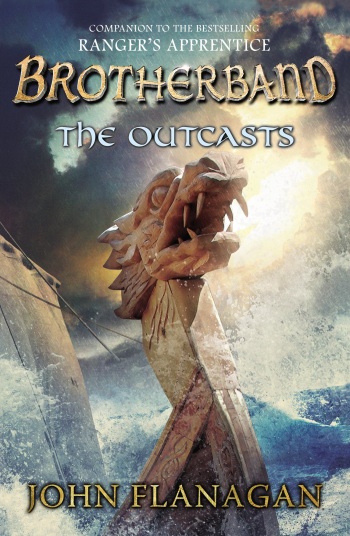 Title: The Outcasts
Series: Brotherband Chronicles; Book 1
Author: John Flanagan
Genre: Fantasy
Audience: Young Adult
ROTS Setting: UU, Medieval, No Higher Magic
Synopsis: Hal is undertaking brotherband training. He’s always had a knack for inventing things but being half Araluen he’s always been a bit of a loner. If his brotherband can win he might finally be accepted.
Recommendation: Don’t know if I’ll read the next one.

Honestly, I didn’t like this very much. Maybe I’ve become too cynical or maybe I’m just more knowledgeable than when I read Ranger’s Apprentice or maybe my expectations were too high. Regardless, this book was a bit of a let down and I had multiple issues with it.

First, the POV was…..messy. It could be my perfectionist/OCD tendencies but the POV jumped around a lot, sometimes for a single paragraph before switching back. This lead to some confusion about who knew/thought/did what. There was also times where it felt like I was being given knowledge that would have been better off left unsaid. In fact, most of the time the story was stated and not really shown to the reader.

The world is familiar but the Skandian culture described here lacked much of the depth and detail hinted at in Ranger’s Apprentice. Like a barely reskinned version the generic medieval fantasy society. What should have entrenched us up to the eyeballs in culture was rather bland and largely forgettable. On top of that, many details were directly contradicted later on.

With POV issues and a bland setting, it’s no wonder that the characters didn’t feel real. They had depth but it rarely, if ever, was allowed to shine through naturally. There were a few moments of real connection, but in the end I’m not invested. There were many more characters than Ranger’s Apprentice so each one didn’t get the attention they deserved leaving them all a little underdeveloped.

As for the story, it’s supposed to mostly be following Hal as he undergoes brotherband training, sort of like Ranger training but with a Skandian twist. What could have been an interesting couple of books was compressed down in favor of setting up one of the major plots of the series. Basically the series premise. And it’s pretty weak. The book is full of plot holes.

The best part of the book is all the nautical elements. If the characters are at sea then it’s amazing. I applaud Mr. Flanagan on his research and dedication to detail in this aspect. If the entire book was this good it would be ranked among the Greats!

The last thing I want to mention is the pacing. The last chapter of the book is so depressing, so disheartening, and so hopeless that I really don’t care what happens next. Putting something so negative at the end of the first book, which didn’t have much in it to begin with, creates a hole so deep and dark that there’s no point in finding out what happens next.

At this point if I never read the next book I would be completely content. As it is, I still don’t know if I’ll read the next one.

One thought on “Brotherband Chronicles – Book 1: The Outcasts – By John Flanagan”