This is the first ever Hype Train post. Basically just stream of consciousness and fangirl/boy screams over books I’m excited for their release. You can expect more hype on the Tuesdays without new release announcements.

If you’ve ever ventured deeper into the depths of the blog you’ll probably have come across our New Release Calendar where I keep the latest info on my favorite authors and their newest work. Last week I trawled through my author list and added over a dozen new books being released this year. Usually it’s not nearly so many but hadn’t checked since before Thanksgiving. Amazon is one of my main sources, but author websites and blogs are equally productive, if more time consuming. I haven’t found an effective way to check publishers directly but that’s another source I’m eager to exploit.

So right now my my biggest hype is for The Axe of Sundering by M.L. Forman (Adventurers Wanted #5). He posted on Facebook over the holidays which is kind of a big deal. The book was originally slated for release in December of 2014 but sadly Mr. Forman had a stroke which delayed it indefinitely.

I plan to reread the series in preparation once an actual release date has been set, which I’m hoping will be announced sometime this spring. 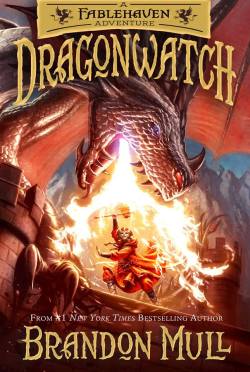 Dragonwatch by Brandon Mull (Fablehaven, Dragonwatch #1) is another I’m eager to get my hands on. Plus look at that cover! His Fablehaven series was pretty good, so this sequel series has my interest piqued. The basic premise it that there are magical preserves to protect magical creatures from us and us from them. A set of siblings comes to visit one being operated by their grandparents. Danger, adventure and plenty of magic ensue and crisis narrowly averted. It’s a great series for younger readers…..and older ones too.

According to both the authors website and Amazon, it’s expected to be released Mar.14.2017. I hope to R+R (Read and Review) at least the first book in Fablehaven before then so I’m all ready for it.

Lastly, what would a hype train be without the anticipation and dread of Winds of Winter by George R.R. Martin (A Song of Ice and Fire #6). It will come out when it comes out, but Mr. Martin sure does take his sweet time. Zero speculation on when to expect it because it’s been wrong. Every. Single. Time. That being said I hope it will be sometime this year, but realistically I know it’s probably a pipe dream.

We’re going to stop there because I could go on forever. Go take a look at the New Release Calendar and comment here if I’ve missed something you think I should be hyped about.