I’m finally done this book! It took me two weeks but I’m done. Not the actual reading time but it wasn’t an easy book to get into. 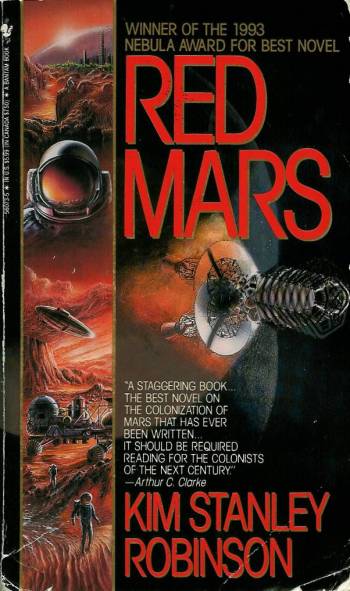 Title: Red Mars
Series: The Mars Trilogy; Book 1
Author: Kim Stanley Robinson
Genre: Science Fiction
Audience: Adult
ROTS Setting: Near-Future, Mars, Terraforming, Colonization,
Synopsis: For eons, sandstorms have swept the desolate landscape. For centuries, Mars has beckoned humans to conquer its hostile climate. Now, in 2026, a group of 100 colonists is about to fulfill that destiny. John Boone, Maya Toitavna, Frank Chalmers & Arkady Bogdanov lead a terraforming mission. For some, Mars will become a passion driving them to daring acts of courage & madness. For others it offers an opportunity to strip the planet of its riches. For the genetic alchemists, it presents a chance to create a biomedical miracle, a breakthrough that could change all we know about life & death. The colonists orbit giant satellite mirrors to reflect light to the surface. Black dust sprinkled on the polar caps will capture warmth. Massive tunnels, kilometers deep, will be drilled into the mantle to create stupendous vents of hot gases. Against this backdrop of epic upheaval, rivalries, loves & friendships will form & fall to pieces–for there are those who will fight to the death to prevent Mars from ever being changed.
Recommendation: For those adults who appreciate Mars-porn.

Not quite what I was expecting. It’s a hefty book with small print, but I already knew that. Most importantly, it drags on and on and on. Roughly halfway it starts to pick up before plunging back to the grind. Grinding is a good way to put it. I didn’t so much read it as wear down the words on the page.

This could be considered Hard Sci-fi under certain definitions but I thing Mars-porn is way more accurate. How does Mars look, what color is it, what temperature of cold does it feel like, what are it’s emotions, what do people think about it, how is if viewed culturally, what’s it made of, what’s it’s history, how can it be used/abused, who controls it, and should it be changed…..and that’s not even half of it.

Plot was…..almost non-existent. At least for me. Characters did stuff…..and corporate/political organizations did stuff……but it never felt like they were leading to something big or important. The first half was almost completely disconnected with the second half except for the very beginning, basically the prologue. The third quarter started sucking me in and then that storyline was truncated.

Ok, so I say ALL that……and it pulled it off in the end. Somehow. This is clearly meant for people with specific tastes and moods. And for me, right now, it wasn’t for me. But it definitely had something going on. The focus is on the experience of these characters and not the characters themselves. Stuff happens but it’s not about the stuff, just like there are politics involved but it’s not about the politics. Everything was about the experience….and some crazy specific details…..and Mars-porn.

So this is going as being recommended, but it comes with a warning. This isn’t for everyone. There is some good stuff there, but it’s pretty niche stuff. I’m even tempted to read the other two books, eventually.