I am a little surprised at how much I liked this book. I didn’t know what I should expect so my imagination and run a bit wild. It was simpler and more amazing. I suppose those who’ve read it probably could have told me that. Anyway, this is a blind review, so take what you will from it. 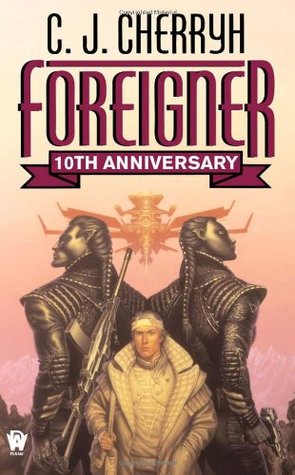 Title: Foreigner
Series: Foreigner Universe; Book 1
Author: C. J. Cherryh
Genre: Science Fiction
Audience: Adult
ROTS Setting: Distant-Future, Colonization, FTL, Aliens
Synopsis: It had been nearly five centuries since the starship Phoenix, lost in space and desperately searching for the nearest G5 star, had encountered the planet of the atevi. On this alien world, law was kept by the use of registered assassination, alliances were defined by individual loyalties not geographical borders, and war became inevitable once humans and one faction of atevi established a working relationship. It was a war that humans had no chance of winning on this planet so many light-years from home. Now, nearly two hundred years after that conflict, humanity has traded its advanced technology for peace and an island refuge that no atevi will ever visit. Then the sole human the treaty allows into atevi society is marked for an assassin’s bullet. The work of an isolated lunatic? The interests of a particular faction? Or the consequence of one human’s fondness for a species which has fourteen words for betrayal and not a single word for love?
Recommendation: Highly recommended!

There is a very grand, epic, massive scale to the book. Also, the only firm details are historical or happening in the moment so it keeps to a pretty narrow focus while still in that grand scale.

The setting could have been a bit more detailed in the actual descriptions of the immediate vicinity of the main character, just to further convey that this is an alien world but since the MC wouldn’t really notice those details it’s not a huge loss in the bigger picture.

Bren Cameron is the main character. I found him to be wildly annoying…..which is normal for me and main characters. Personally I found him a touch whiny and for being an interpreter whose literal job is to speak clearly and concisely he spends an awful lot of time saying the wrong thing……..Just sayin’. My personal irritations aside he was a very well rounded character. He felt pretty real and his actions very closely matched his character and personality.

The alien atevi were a bit too human in physical appearance for me. But their society and psychology are wonderfully alien in all the right ways! I loved every nuance and detail.

Ok, the plot. This is not an action/adventure. It’s basically pure political intrigue which, to me, was masterfully done. Game of Thrones is often used as a comparison when talking about political plots in books. It’s not like GoT. GoT is grand in scale but has a bloody brutality that’s not in this book. Political finesse in comparison really. Also GoT has a lot of action when compared to this book. While Foreigner is pretty much a single POV so the focus is much narrower. It’s a very different experience but not an unpleasant one.

My one thing that pissed me off so bad I had to take a break for a couple of hours….There are basically two prologues. So after the first one I was really getting into it and when I finished the second and realized the huge jump I was so pissed! I honestly yelled at the book, slammed it on the table, and walked away for a couple of hours. Really it could be thought of as a good thing because it just mean that the backstory felt very real and amazing……..but I so wanted to find out what happened…..as it was happening and not the watered down historical version.

In summary, this book was pretty amazing. I can see why the eighteenth book, Convergence, came out a few days ago. I’m looking forward to reading more, but it might be a while before I get to it. I know I’m going to read them rapid fire and on a regular basis and I’m just not ready for that right now. They deserve my full attention.