I was really pleased with this book and that might not be too surprising. I’d heard it was pretty good (as good or better than the movie). 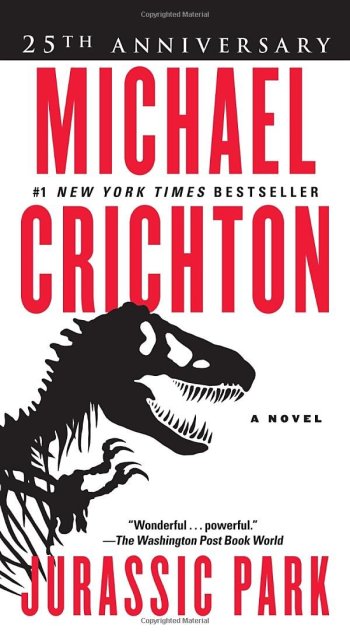 Title: Jurassic Park
Series: Jurassic Park Series; Book 1
Author: Michael Crichton
Genre: Science Fiction
Audience: Adult
ROTS Setting: CU, Present Day, Dinosaurs, Cloning, Genetic Manipulation
Synopsis: A billionaire has created a technique to clone dinosaurs. From the DNA that his crack team of scientists extract, he is able to grow the dinosaurs in his laboratories and lock them away on an island behind electric fences, creating a sort of theme park. He asks a group of scientists from several different fields to come and view the park, but something goes terribly wrong when a worker on the island turns traitor and shuts down the power.
Recommendation: This book is highly recommended. Good for teens and adults.

The characters were a bit light but I never felt they weren’t people, they just weren’t the focus. They fulfilled their purposes.

When it came to the science-y bits I enjoyed it for the most part. The first half of chaos theory was great……the second half was torturous. And the dinosaurs and paleontology were amazing. There’s a lot of speculation in that particular field and it was nice to see that represented.

I thought the plot was well paced with a good mix of slower parts and action. The implications of the premise were very interesting and I want to know about how the world will handle having dinosaurs on the loose. (Although I’ve heard the other books aren’t as good.)

In summary I’m very pleased with my experience reading this cult classic. I’ll get to the other books in the series at some point, but they’re not as high a priority as this one was.