Finally going to try and get this trilogy finished! The first book was just a strong start, I just don’t want to leave it hanging for long. 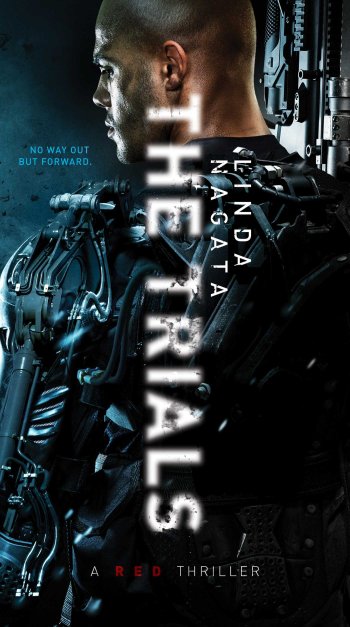 Title: The Trials
Series: The Red; Book 2
Author: Linda Nagata
Genre: Science Fiction, Military Scifi
Audience: Adult
ROTS Setting: CU, Modern/Near-Future,
Synopsis: Lieutenant James Shelley and his squad of US Army soldiers were on a quest for justice when they carried out the unauthorized mission known as First Light. They returned home to America to face a court-martial, determined to expose the corruption in the chain of command that compelled their actions. But in a country still reeling from the nuclear terrorism of Coma Day, the courtroom is only one battlefield. A new cycle of violence ignites when rumors of the elusive, rogue AI known as the Red go public—and Shelley is, once again, pulled into the fray. Challenged by his enemies, driven by ideals, Shelley feels compelled to act—but are the harrowing choices he makes really his own, or are they made for him, by the Red? With millions of lives at stake in a game of nuclear cat-and-mouse, does it even matter? (Hazard Notice: contains military grade profanity.)
Recommendation: Highly recommended! For mature readers. Graphic violence and explicit sex scenes.

I just want to start out that pretty much the whole time I was reading I just wanted to go back and reread the first book. I’ve never had that kind of experience before. Normally, once read, I’m content with my first read through for several years. There’s just something about it that still has its hooks in me.

On with the actual review.

The first half was a slow start. Very slow, in fact. It’s not that it was irrelevant, it just had a lot of events and material to get through after all the crazy awesomeness of the first book. It promised more action later on, and it certainly delivered.

Thing picked up quickly enough and I was really getting into it until the final quarter of the book. It’s hard to describe without giving some kind of spoiler. Basically an event happens and the tone changes. Not just of this book but of the series. It just doesn’t feel the same. Almost to the point of it all feeling fake or artificial. Not just coincidence or the Red interfering, but just completely constructed. Thankfully things started to shift back toward familiar ground but I’m still left with the feeling that the book is different than the one I started.

Shelley is still a decent character. Up until the tone shift I would have said great character, but until I get into the next book I just don’t know what I think about him now.

Delphi makes another appearance and I honestly thought she was a perfect character. This bad-ass with emotions and depth and competence and awesomeness. I don’t normally have book crushes, but she would certainly be eligible. (Sorry, Lisa.)

When it comes to world, you just need to go read the first book. The tech is amazing and society is so very similar to our own but the differences are striking and riveting. I seriously can’t give you anything more, just go read it.

In summary, it was a good sequel but I’m left a little concerned about the next book. Not a lot though, but it’s there. I’m thinking I’ll get to the third and final book sometime next month so keep your eyes peeled for it.