This was really entertaining and surprisingly deep.

Title: The Reaction
Series: Animorphs; Book 12
Author: K. A. Applegate
Genre: Science Fiction
Audience: Youth
ROTS Setting: CU, Modern, Aliens
Synopsis: Rachel’s got some pretty strange stuff happening. She can’t control her morphing. One minute, she’s doing homework. The next, she’s morphing a full-grown crocodile, and — without returning to human form — she becomes an elephant. That’s when the floor gives way and Rachel finds herself looking up at what used to be the kitchen ceiling.
Recommendation: Highly recommend this series.

END_OF_DOCUMENT_TOKEN_TO_BE_REPLACED

I’ve always liked this book…. and I don’t really know why. It might be the cover, or that Jake is the POV, or jaguars, or just the way it’s written. 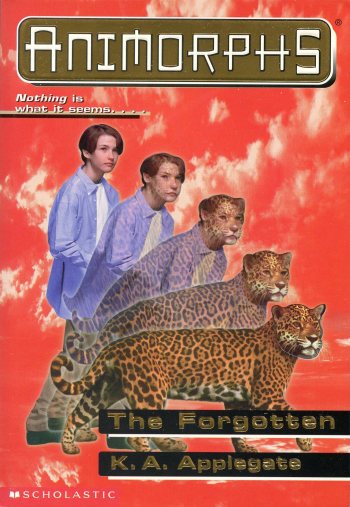 Title: The Forgotten
Series: Animorphs; Book 11
Author: K. A. Applegate
Genre: Science Fiction
Audience: Youth
ROTS Setting: CU, Modern, Aliens
Synopsis: There’s been an accident. Someone crash-landed a Yeerk Bug fighter. And the Yeerks have been trying to cover it up – quickly. But not before Tobias spots it. So the Animorphs and Ax decide to steal the ship to show the world that Earth has been invaded.
Recommendation: Highly recommend this series.

END_OF_DOCUMENT_TOKEN_TO_BE_REPLACED 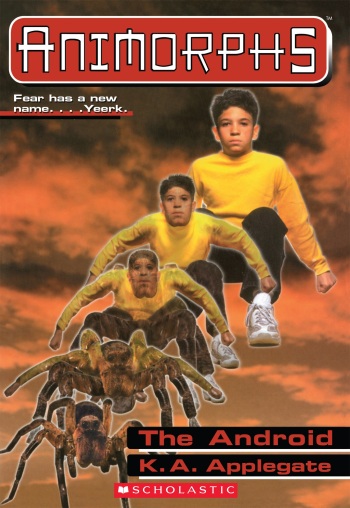 Title: The Android
Series: Animorphs; Book 10
Author: K. A. Applegate
Genre: Science Fiction
Audience: Youth
ROTS Setting: CU, Modern, Aliens
Synopsis: When Marco runs into his old friend Erek he doesn’t think too much of it. He’s got a couple of more important things to do. Like helping to save the world. But then Marco finds out Erek’s been hanging with some of the kids at The Sharing. And he starts to think that something just a little weird is going on.
Recommendation: Highly recommend this series.

END_OF_DOCUMENT_TOKEN_TO_BE_REPLACED

It might just be me, but it feels like the series has matured significantly in this book and the last. Our ickle series if really growing up.

Title: The Secret
Series: Animorphs; Book 9
Author: K. A. Applegate
Genre: Science Fiction
Audience: Youth
ROTS Setting: CU, Modern, Aliens
Synopsis: There’s something pretty weird going on in the woods behind Cassie’s house. The place where Ax and Tobias call home. It seems the Yeerks have figured out one very important thing: Andalites cannot survive without a feeding ground. Visser Three knows the “Andalite bandits” don’t feed where he does, so there can only be one other place. Now Cassie, Marco, Jake, Rachel, Tobias, and Ax have to figure out a way to stop a bogus logging camp. Because if Visser Three finds Ax in the woods, nothing will stop him from finding the Animorphs…
Recommendation: Highly recommend this series.

END_OF_DOCUMENT_TOKEN_TO_BE_REPLACED

This might be one of the most useful books to the series. Maybe not the best, but a lot happens in a very short amount of time.

Title: The Alien
Series: Animorphs; Book 8
Author: K. A. Applegate
Genre: Science Fiction
Audience: Youth
ROTS Setting: CU, Modern, Aliens
Synopsis: What would you do if you were the only alien trapped on a strange planet? Probably freak out, right? Well, that’s what Ax feels like doing. But as an Andalite warrior-cadet, he has to be pretty cool about stuff like that. He’s been hanging out with the Animorphs ever since the Dome ship was destroyed by the Yeerks and his brother, Prince Elfangor, was destroyed by Visser Three. Life on Earth is pretty different for Ax. But there is one thing he, Cassie, Marco, Jake, Rachel, and Tobias have in common. Something that one alien, four kids and a hawk know they have to do: stop the Yeerks…
Recommendation: Highly recommend this series.

END_OF_DOCUMENT_TOKEN_TO_BE_REPLACED

This will either be the last book in the series for a while or the last one strictly in order……I haven’t decided which. You see, I don’t own #8 and the library doesn’t have any of the other books beyond #6 (and that was a three month wait). So I can either wait until I happen to find the next book while book hunting or I can skip it.

Title: The Stranger
Series: Animorphs; Book 7
Author: K. A. Applegate
Genre: Science Fiction
Audience: Youth
ROTS Setting: CU, Modern, Aliens
Synopsis: Okay. Rachel and the other Animorphs have finally found the new entrance to the Yeerk pool. They’ve even figured out a way to sneak in. The infamous roach morph. But they didn’t count on roaches being a Taxxon delicacy. This time escape doesn’t look so good. And then everything stops. Everything. The feasting Taxxon, the human-Controllers, the Hork-Bajir. Time. Now Rachel, Cassie, Marco, Jake, Tobias, and Ax are in for their wildest trip ever. They’re going to get the chance to decide whether they want to stay on Earth and fight the Yeerks. Or go to another planet. And the guy giving them the choice says he can save them. Now all they have to do is make the choice…
Recommendation: Highly recommend this series.

END_OF_DOCUMENT_TOKEN_TO_BE_REPLACED

This is one of only a dozen or two that I’m missing from my shelf so I naturally turned to the public library. Two months later it finally shows up and I’m done it in 2-3 hours. A more disturbing discovery is that the library doesn’t have any books later than this one…..so if my readthrough is to continue I’ll need to buy the ones I’m missing. The question is do I pay $4 each and get them as I need them or do I just wait (and pray) for them to show up at my usual hunting spot for a buck?

Title: The Capture
Series: Animorphs; Book 6
Author: K. A. Applegate
Genre: Science Fiction
Audience: Youth
ROTS Setting: CU, Modern, Aliens
Synopsis: It was really bad when Jake found out his older brother was one of them. It was even worse when Tobias stayed in his morph too long. But nothing compares to the horror the Animorphs are about to face. Nothing. Jake and the other Animorphs have a feeling they know where the Yeerks’ new base is located. And they’ve found out how to get in – how many people will really notice a few flies on the wall? But they never figured that they might get caught. Or that Jake could fall into the Yeerk pool. That Jake could become a human-Controller. A Yeerk. The enemy.
Recommendation: Highly recommend this series.

END_OF_DOCUMENT_TOKEN_TO_BE_REPLACED

I forgot how iconic most of the first few books in the series are. So many things happen, but I suppose it would need to given how short they are.

END_OF_DOCUMENT_TOKEN_TO_BE_REPLACED

The Bookshelf Blitz has been going pretty well. I’m starting to see how the month is going to shape up. The big thing is staying focused.

Title: The Message
Series: Animorphs; Book 4
Author: K. A. Applegate
Genre: Science Fiction
Audience: Youth
ROTS Setting: CU, Modern, Aliens
Synopsis: It all started with the dreams. But Cassie didn’t pay much attention to them. She and her friends had all been having weird dreams since they’d first learned to morph. Maybe it was just some crazy side effect.
Recommendation: Highly recommend this series.

END_OF_DOCUMENT_TOKEN_TO_BE_REPLACED

I’ve decided I need to get started on this series sooner rather than later. My plan is to read at least one a month, but with 52 books plus extras I don’t really want to still be reading this series 4 years from now. 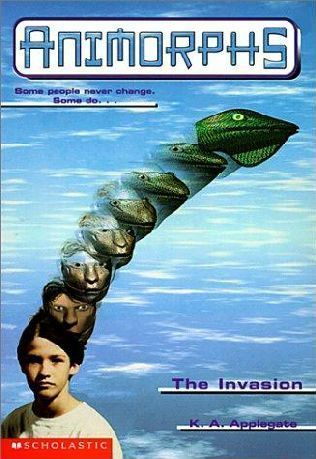 Title: The Invasion
Series: Animorphs; Book 1
Author: K. A. Applegate
Genre: Science Fiction
Audience: Youth
ROTS Setting: CU, Modern, Aliens
Synopsis: Sometimes weird things happen to people. Ask Jake. He may tell you about the night he and his friends saw the strange light in the sky. He may even tell you about what happened when they realized the “light” was only a plane — from another planet. Here’s where Jake’s story gets a little weird. It’s where they’re told that the human race is under attack — and given the chance to fight back.

Now Jake, Rachel, Cassie, Tobias, and Marco have the power to morph into any animal they choose. And they must use that power to outsmart an evil that is greater than anything the world has ever seen…
Recommendation: Highly recommend this series.

END_OF_DOCUMENT_TOKEN_TO_BE_REPLACED

Animorphs – Book 1: The Invasion – By K. A. Applegate
Loading Comments...