It’s a decent book, but it didn’t stand-out. And as it turns out the second book just came out a couple of months ago.

Title: EXO
Series: Exo; Book 1
Author: Fonda Lee
Genre: Science Fiction
Audience: YA
ROTS Setting: CU, Future, Aliens, Technology, FTL, Dystopian
Synopsis: It’s been a century of peace since Earth became a colony of an alien race with far reaches into the galaxy. Some die-hard extremists still oppose alien rule on Earth, but Donovan Reyes isn’t one of them. His dad holds the prestigious position of Prime Liaison in the collaborationist government, and Donovan’s high social standing along with his exocel (a remarkable alien technology fused to his body) guarantee him a bright future in the security forces. That is, until a routine patrol goes awry and Donovan’s abducted by the human revolutionary group Sapience, determined to end alien control. When Sapience realizes whose son Donovan is, they think they’ve found the ultimate bargaining chip . But the Prime Liaison doesn’t negotiate with terrorists, not even for his own son. Left in the hands of terrorists who have more uses for him dead than alive, the fate of Earth rests on Donovan’s survival. Because if Sapience kills him, it could spark another intergalactic war. And Earth didn’t win the last one…
Recommendation: I recommend this series. It’s nothing special, but not bad.

END_OF_DOCUMENT_TOKEN_TO_BE_REPLACED

Check out my original review here.

I stand by everything I said before, the biggest difference was that this time it was an audiobook read by the silky tones of Wil Wheaton. My favorite part was when Mr. Wheaton got to read about himself in the book…..it’s not actually funny but it was ironic funny.

Wade/Parzival is still OP and still a jerk.

I also picked up on the political nature of some of the various elements. It’s not overly burdensome but I did notice it and one or two instances felt a bit forced or contrived.

It’s still a great book and a fun read. This was one of the first books I read and reviewed for the blog, 2 and a half years ago, and I can’t really add anything to it….. I guess I’ll need to wait longer before re-reviewing. Ok, the only reason I did it this time was because I had it on audiobook and the movie came out recently……which I still need to see and it doesn’t come out on DVD for almost two months. Basically, it was a matter of convenience.

END_OF_DOCUMENT_TOKEN_TO_BE_REPLACED

Title: The Android
Series: Animorphs; Book 10
Author: K. A. Applegate
Genre: Science Fiction
Audience: Youth
ROTS Setting: CU, Modern, Aliens
Synopsis: When Marco runs into his old friend Erek he doesn’t think too much of it. He’s got a couple of more important things to do. Like helping to save the world. But then Marco finds out Erek’s been hanging with some of the kids at The Sharing. And he starts to think that something just a little weird is going on.
Recommendation: Highly recommend this series.

END_OF_DOCUMENT_TOKEN_TO_BE_REPLACED

Available May.15.2018 – Ascendant by Jack Campbell

END_OF_DOCUMENT_TOKEN_TO_BE_REPLACED

It might just be me, but it feels like the series has matured significantly in this book and the last. Our ickle series if really growing up.

Title: The Secret
Series: Animorphs; Book 9
Author: K. A. Applegate
Genre: Science Fiction
Audience: Youth
ROTS Setting: CU, Modern, Aliens
Synopsis: There’s something pretty weird going on in the woods behind Cassie’s house. The place where Ax and Tobias call home. It seems the Yeerks have figured out one very important thing: Andalites cannot survive without a feeding ground. Visser Three knows the “Andalite bandits” don’t feed where he does, so there can only be one other place. Now Cassie, Marco, Jake, Rachel, Tobias, and Ax have to figure out a way to stop a bogus logging camp. Because if Visser Three finds Ax in the woods, nothing will stop him from finding the Animorphs…
Recommendation: Highly recommend this series.

END_OF_DOCUMENT_TOKEN_TO_BE_REPLACED

Ha! Finally finished the trilogy and it was well worth it. 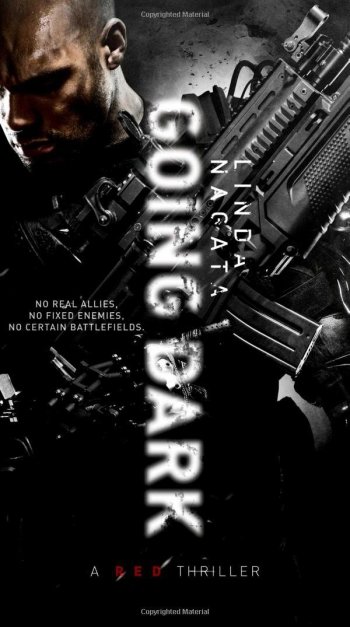 Title: Going Dark
Series: The Red; Book 3
Author: Linda Nagata
Genre: Science Fiction, Military Scifi
Audience: Adult
ROTS Setting: CU, Modern/Near-Future,
Synopsis: James Shelley has left his lover, Delphi, and his companion-in-arms, Jayne Vasquez, with a fortune acquired from a fallen oligarch. They believe him to be dead, and he doesn’t try to set the record straight. His long-running question has been answered: There are other soldiers like him who have served the purposes of the Red—and he has accepted his place among them. As a soldier of the Red he pursues covert missions designed to nudge history away from existential threats—but that doesn’t mean the world is growing more orderly. It’s only in the froth of a “managed chaos” that human potential can grow and thrive. Shelley’s missions eventually take him into orbit—and into conflict with those he loves—Delphi and Jaynie—who are determined to escape the influence of the Red.
Recommendation: Highly recommended! For mature readers. Graphic violence.

END_OF_DOCUMENT_TOKEN_TO_BE_REPLACED

The Red – Book 3: Going Dark – By Linda Nagata
Reading Over The Shoulder
Blog at WordPress.com.