This month ended up being a lot bigger than I thought it would be. I was going to keep better control of myself……or try to, at least. That clearly didn’t happen. Either I’m really, really good at finding and getting books or I have a problem…….I might need an intervention.

Secrets of the Dragon Sanctuary completes our collection of Fablehaven. The Copernicus Legacy was recommended to me by daleydowning over at The Invisible Moth. Legends of the Dragonrealm just sounded good. And for the last, it’s Dragonlance……need I say more? 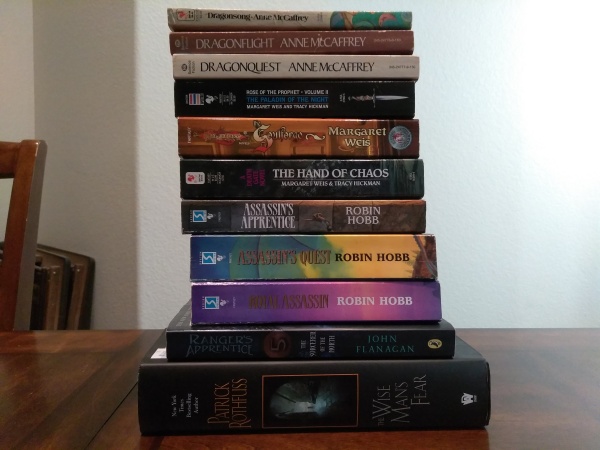 I basically have a standing rule that if I find any book in the Dragonriders of Pern series, that I have to get it. So Dragonsong completes the Harper Hall trilogy for me. My current copy of Dragonflight was literally falling apart (which is why I got it for free) so this replacement is much needed. I technically didn’t need another Dragonquest but I couldn’t remember the condition of the one I already have.

Weis & Hickman are pretty much the same. I want them all because they’re amazing 90% of the time. I haven’t read Rose of the Prophet yet so I grabbed this one in spite of it being the second book. Soulforge is supposed to be amazing, and from what I remember it was even if I didn’t finish it. (Wasn’t ready for it a decade ago.) The Hand of Chaos adds to my collection of Death Gate books……which I need to get around to reading.

I found the entire Farseer Trilogy and since you seemed to like them I might at well get the set. I also now have #1, 3, and 5 of Ranger’s Apprentice. And lastly I couldn’t pass up this gorgous hardcover in the King Killer Chronicle. I need to read the first still…….I know. I have a problem.

So I went slightly crazy and requested a review copy from an author this month. We’ve received requests before, which we didn’t feel fit our blog so politely declined, and I’ve done a couple books off NetGalley. But this was the first time sending off an email and asking for a book.

The Last Good Man by Linda Nagata is expected to be released Jun.20.2017. (Here it is on Goodreads.) Here’s the blurb: Army veteran True Brighton left the service when the development of robotic helicopters made her training as a pilot obsolete. Now she works at Requisite Operations, a private military company established by friend and former Special Ops soldier Lincoln Han. ReqOp has embraced the new technologies. Robotics, big data, and artificial intelligence are all tools used to augment the skills of veteran warfighters-for-hire. But the tragedy of war is still measured in human casualties, and when True makes a chance discovery during a rescue mission, old wounds are ripped open. She’s left questioning what she knows of the past, and resolves to pursue the truth, whatever the cost.

Sounds pretty good right? Also look at that cover! Wow…….just wow! Anyway, my intention is to read and reviewed it before the publication date. But I haven’t decided on the specific date yet. It’s looking like sometime the week before though.

A sale and a coupon got me Portal of a Thousand Worlds by Dave Duncan for just $0.50. How can I say “no” to that?! I plan to read and review that soon-ish but no exact time frame because my to-read list is ridiculously long right now.

I also purchased the Brander Sanderson Bundle off HumbleBundle which included, Firstborn / Defending Elysium, The Emperor’s Soul, Legion, Legion: Skin Deep, Sixth of the Dusk, Shadows for Silence in the Forests of Hell, Perfect State, Snapshot, Dreamer, and White Sand. Plus GraphicAudio’s audiobook for Elantris, Hope of Elantris and Warbreaker. AND the tabletop RPG Mistborn Adventure Game with Terris and Alloy of Law expansions. Pretty good for just a $15 donation to Doctors Without Borders. (I always designate all the money from a bundle to a charity.)

In March I won The Fallen Gatekeepers by C. R. Fladmark (The Gatekeeper’s Son #2) off Goodreads. It arrived at the beginning of April and I began eagerly reading the first book in preparation. I’m hoping to publish the review on May.15.2017.

This month I won a Kindle version of Fate of Devotion by K. F. Breene (Finding Paradise #2) off Goodreads. Again, it’s the second book so I’ll need to read the first one. Thankfully it’s on KindleUnlimited, but I have no clue when I can get to either of them.

I also won the Kindle version of The Utopia Chronicles b Matthew Mather (Atopia #3) off Goodreads. And while not the second book it is the third……smh. They are on Kindle Unlimited as well so I’ll get to them……sometime.